Pace, Florida’s Elena Weaver defeated Bradenton’s Emily Oliveira 6-1, 6-3 to win the Girls 14 Championship at the USTA North Florida Junior Level 5 tournament in Tallahassee on July 20, 2015. Weaver didn’t lose a set in her five matches and only lost a maximum of four games in any one match. 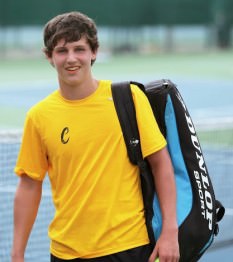 Great effort by both local players in having a good enough year to get into the National tournaments and in winning matches. 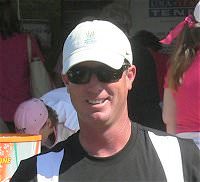 Edge had been the head of one of the top prep tennis programs in the area for six years. Edge will be marketing in the FSU men’s tennis program as well as a development coach with the Seminole high performance efforts. Edge’s Washington teams garnered two state runner-up trophies, three regional championships and 11 district championships.

Coming home to replace Edge at Washington is former Pensacolian, Mark McGuigan. McGuigan played both high school and college tennis in Pensacola. After graduating from the University of West Florida in 2008, McGuigan was an assistant coach there.

Good luck to both coaches Edge and McGuigan in their new endeavors.

Pensacola’s first-ever Level 9 Junior Tennis Event was held on Saturday, July 18, 2015 at Roger Scott Tennis Center in Pensacola. While not large in numbers (14 attended), the enthusiasm was terrific. The kids played singles and doubles in a timed round robin format using age-appropriate balls and rackets. 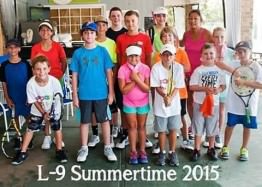 Players received t-shirts, lunch and had plenty of water and Gatorade. Since it was nearly impossible to get the kids off the court on a 105 heat index day, organizers were very happy with the event.

Rita Dotson, local area tennis professional, organized the event and was assisted on the court by Josh Koivu, a Roger Scott teaching professional. 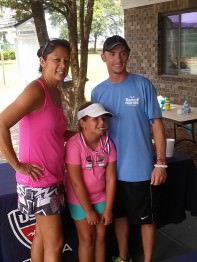 Singles results for the Pensacola Level 9 were as follows:

The Women’s 40 and Over 3.5 USTA League team from the Escambia/Club II defeated Seminole/Waterford Lakes 3-2 to win the Florida Sectional Championships on July 19, 2015 at the Florida Tennis Center in Daytona . The women went 2-1 in the Flight 2 round robin play and qualified for the semifinals with less individual match losses. 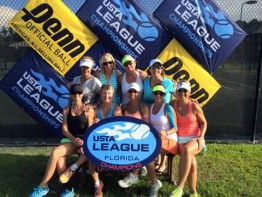 Team Captain Renee Baggett was undefeated for the weekend playing doubles with both Anna Kreis and Ingrid Hewette. Jeanie Ephron and Jureda Lambert were 4-1 for the weekend with their lone loss a third-set tiebreaker in the finals.

On the same weekend, the Escambia/Roger Scott Tennis Center (RSTC) 40 and Over Men’s 3.5 team tied in their Flight 1 round robin 3-1 with Duval County/Boone Park. However, Boone Park made the final by losing one less individual match than the RSTC men. Just one lost tiebreaker along the line made the difference.

World famous tennis guru and entrepreneur Nick Bollettieri paid a surprise visit to Sandestin Beach Resort in Miramar Beach near Destin. One of the Sandestin Tennis Pro Shop ladies went to a Bollettieri three-day camp while her husband was at a conference. One thing led to another and one of Nick’s good friends who flies Nick around lives in Sandestin.

Arrangements were made to fly Bollettieri down for the day (July 25th) for a two-hour clinic. Bollettieri and Sandestin pro Kevin Tucker worked the Flight 1 ladies league team and another court of Sandestin members and juniors.

Afterward, the principle parties headed to the Market Shops at Sandestin and the new restaurant DIG where they ate lunch and an early birthday cake provided by DIG for Bollettieri.

All in all it was a great time for friends and players at Sandestin. 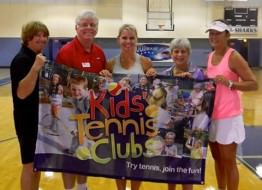 A USTA Kids’ Tennis Club (KTC) allows kids to enjoy tennis through supervised play and interactive games and activities. No courts are required and no instruction is necessary. With the right sized equipment kids can quickly learn to rally and have fun right from the start! This is a great way to introduce kids to tennis and
develop sport as well as social skills in a safe, open-play setting.

More than 40 Escambia county PE teachers attended the workshop to learn how to facilitate a Kids’ Tennis Club program at their school. While the attendance was predominately elementary school teachers, there were several middle school teachers there as well. 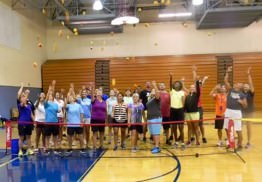 Tara Dominguez posted on Facebook, “Great job to Susan and all the Escambia County teachers and administrators that welcomed USTA Florida and engaged in some quality youth tennis training that will benefit all PE programs!!!!!”

This is where our future players will start. For more information about Kids’ Tennis Club, click on the link below.