The 65th USTA Florida Annual Meeting and Tennis Celebration weekend was held November 22-23, 2014 at the Hyatt Regency Grand Cypress in Orlando. The Panhandle region captured three of the top awards for the year.

Pensacola’s David Mayo was named Wheelchair Player of the Year. Mayo both plays and is the tournament director of the Annual Pensacola Open Wheelchair Tennis Championships held in March of the last 11 years. This year Mayo won the “B” division title at the ITF wheelchair event. 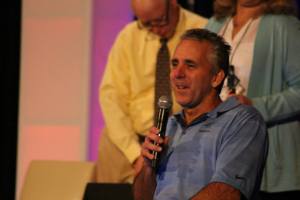 As of this fall, Mayo was ranked No. 3 in Florida and No. 15 nationally, and his efforts throughout 2014 have resulted in his second Wheelchair Player of the Year honor, coming 10 years after his first in 2004.

Also named the 2005 Pensacola Sportsman of the Year, and in 2010 receiving the Service to Mankind Award presented by the Sertoma Club, Mayo has not only excelled on court, but off the court has grown the Pensacola Open Wheelchair Tennis Championships into the third-largest wheelchair tournament in the country, regularly attracting players from more than 18 nations.

Chipley’s Adam Decker received the USTA Florida Tennis on Campus Award for 2014. Decker’s years on the Gainesville campus have been a boon to the club program that has thrived under his presidency and leadership. 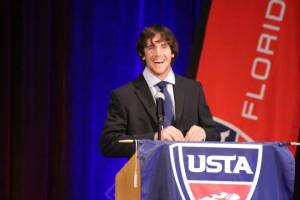 Under his stewardship the club doubled its number of active members, and laid the groundwork for future success by mentoring younger club participants for leadership positions. Among his contributions were also expanding club tournaments, outreach, social activities and fundraising, and even mentoring leaders at other school TOC programs.

His more than 300 hours of community service has included organizing the UF Club Tennis Alumni Week; an annual recreational trip to the Miami Open pro event for club members; and keeping the group active in giving back to the Gainesville community. On the court, his legacy is part of the UF club team winning the Florida ‘Tennis on Campus’ Championships in five of the last six years, and finishing runner-up at TOC Nationals the last two years.

The 2014 Rosemary Beach Adult Designated Tournament was awarded the Al Mills Memorial Adult Tournament of the Year. Rosemary Beach Director of Tennis Michael Clark served as tournament director for this event and was ably assisted by Head Professional Byron Townsend to ensure a complete tournament experience for participants, along with the maintenance staff working hard to keep the courts in immaculate condition over the four days of the event. In addition to adult beverages and soft drinks throughout the weekend, players also receive a dry-fit t-shirt, a Friday evening dinner by Carrabas, and a Saturday luncheon by Summer Kitchen Cafe among other amenities. 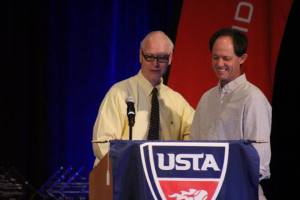 Prize money was awarded to the singles winners in all divisions, while all draws feature first-round consolation or round robin. For those looking to make a weekend of it, the tournament worked with the Rosemary Beach Cottage Rental Company to provide great rates.

This year nearly 40 percent of the entry fees, or nearly $3,000, was donated to the local chapter of The American Cancer Society, continuing the tournament tradition of giving back to the local community.

Led by the Club II 40+ 7.0 Mixed Doubles Team which finished as runner-up, three Escambia teams made it to the USTA League National Championships in November. The 40+ 6.0 Mixed Doubles team from Roger Scott just missed out making the semifinals after tying for the lead in their pool and losing the tiebreaker points. The Men’s 40+ 3.5 Team finished 2-2 in their matches in Tuscon, AZ. 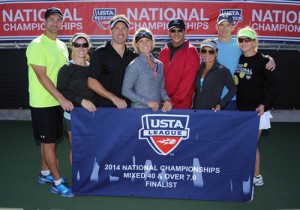 The 40+ 7.0 Mixed team played in Surprise, AZ (Phoenix area) November 21-23, 2014. In pool play the team defeated Northern 3-0 and Missouri Valley 2-1 while losing to Southwest 1-2. Tied with Missouri Valley and Southwest after pool play the Club II team went on to the semifinals by virtue of the tiebreaker points. In the semis, the locals defeated Eastern 2-1 before falling in the finals to Hawaii 3-0. 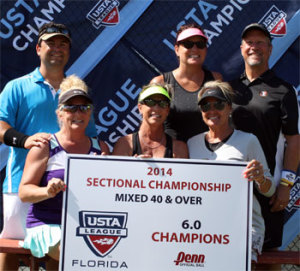 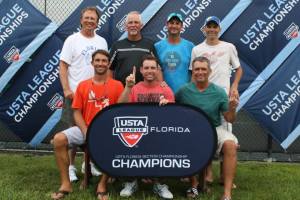 What a terrific testament to tennis in the Pensacola area when three teams can advance to the USTA National Championships. Congratulations to all.

For some 30 years, Pensacola area tennis professional Brian Sakey has hosted the Pensacola City Clay Court Championships. The first tournaments were held at the Pensacola Country Club, then moved to the now-closed Pensacola Racquet Club, later to The Club in Gulf Breeze and in 2014 at Roger Scott Tennis Center in Pensacola.

About 55 players participated in this year’s event which was held concurrently with the semis and finals of the $10,000 Pensacola Open Men’s Futures Professional Tournament. 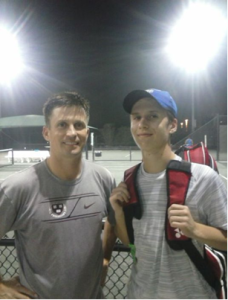 The winners of the various events were as follows: 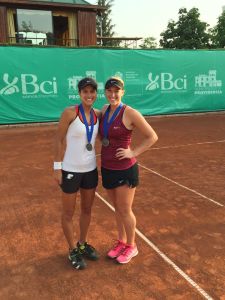 Guarachi also won two rounds of singles before losing in the quarterfinals to the #2 seed 6-4, 7-6(1).

Chris Ephron of Pensacola won four matches while losing only two games in the qualifying tournament for the Boys 16 at the Eddie Herr International Junior Tennis Tournament at IMG Academy in Bradenton, FL on November 26-December 7, 2014.