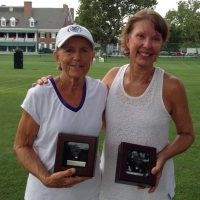 In doubles, Wachob teamed with a new partner, Toni Novack (Naples, FL). The tournament seeding committee thought enough of the duo to seed them #1. After cruising through the draw to the finals they were upset 4-6, 7-5, 6-3 in a terrific match by Hahn and Victoria McEvoy (Cambridge, MA) the #2 seeds. Still, it was a great tournament for Betty winning two Silver Balls. 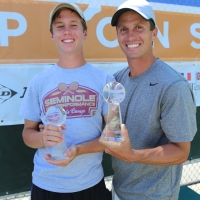 Scott Baehr and his son, Jacob, made their second appearance at the USTA National Father/Son Grass Court Championships held July14-16, 2014 at the Longwood Cricket Club in Chestnut Hill, MA.

Last year, the Baehrs were unseeded and lost in the quarters to the Sakey’s from Pensacola. Then Baehrs won three straight matches. In 2014, the Baehrs came into the draw as the 3rd seed. The Baehrs defeated #5 Woldmoe’s (Fishers, IN) 7-6(8), 7-6(4) in the quarters. In the semifinals, the top-seeded Morse-Karzens (Wilmette, IL), a perennial favorite at the grass courts, handled Baehrs 6-4, 6-2. However, Scott and Jacob came back to win going away 6-7(2), 6-3, 6-1 over the Fraziers (LaCanada, CA) to capture their first National Bronze Ball.

There will be more National Balls for these two I’m sure. 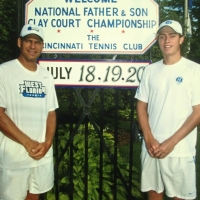 Derrick and Austin Racine, Chris Ephron and Elena Weaver also played in National level tournaments in July. The Racine’s were one of the 5-8 seeds at the USTA National Father/Son Clay Court Championships held July 18-20, 2014 at the Cincinnati Tennis Club in Cincinnati, OH.

The Racines won two rounds handily before falling 6-0, 6-3 in the quarters to the top-seeded Weinackers (Birmingham, AL). In the quarterfinal play-off, Racines lost 2-6, 6-3, 6-4 to the Grangers (Lake Forest, IL) another 5-8 seed.

One of the top junior tournaments in the world is the USTA Boy 16-18 National Championships held at Kalamazoo, MI, on July 30-August 10. 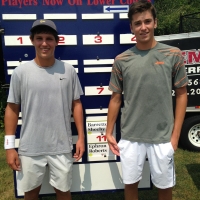 Chris Ephron played both singles and doubles with Davey Roberts (Palm Coast, FL) in the event. The draws were 128 with a full feed-in consolation. Ephron lost a close 7-5, 7-6 to the 18th seed in his opening match. Ephron won two consolation matches before falling 6-4, 6-2 to Josh Marchalik (NJ). 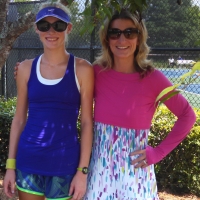 Elena Weaver played at the USTA National Girls 14 Hardcourt Championships at the Peachtree City Tennis Center in Atlanta on August 2-8, 2014. The Girls 14 championship was a 128 compass draw which guaranteed each player at least four matches. Weaver won her opening round 2 and 2 before falling 6-0, 6-2 to the #6 seed and eventual tournament winner Caty McNally (Ohio).

Weaver then lost 6-4, 6-3 to the 17th seed before winning three straight set matches to reach the final of her compass draw. There, Weaver came up two points short to fellow Floridian Angelica Blake (Boca Raton) 2-6, 6-1, 13-11.

For Ephron and Weaver it’s just an honor to get into these gold ball USTA National Championship tournaments. Based on their results this year and continued hard work, they should be able to improve these showings every time out.

On July 26 at the Roger Scott Tennis Center in Pensacola, the second-ever Florida USTA 40-Point Tournament was played. This format is designed to have half-day tournaments in a round robin format and get several matches completed in the morning (singles) and after lunch for doubles.

The format is 40 points. Each team or player serves 5 points, switches sides after 10 points and play continues until 40 points have been completed. Points won are tallied at the end of all the round robin matches to get winners and runners-up in each division.

A nice turnout of 44 players came to Roger Scott on Saturday. They participated in three divisions: the Women’s 3.5 Doubles, the Mixed Doubles 3.5 and the Rainbow division which included a mixture of 3.5, 4.0 and 4.5 players.

The format got mixed reviews from “Great for a hot summer day” to “Sucks”! The most common complaint was difficulty keeping score. Players used to either no-ad scoring or regular tennis scoring had a hard time keeping track of 15-13 type of score.

One player said of the 40-point system that there was no opportunity to “reset” as in a regular tennis match. Once the other team gets to 20 points, there’s absolutely no chance to win. In a regular match, one can blow the first set, and still regroup in the second set.

Most of the players felt that playing some format was better that not playing! Tournament Director Stephen Allison did an outstanding job.

Winners were as follows: 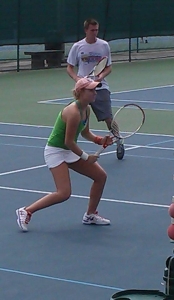 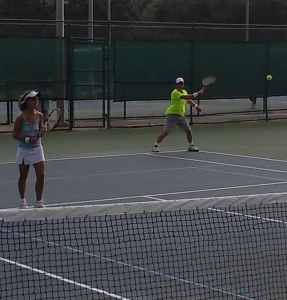