The past six weeks have been fruitful for many different tennis players in the USTA Florida Region 1/Panhandle area. 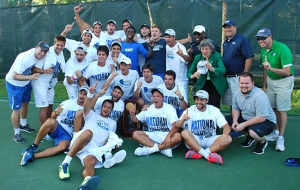 UWF swept all the doubles points from HP although the #3 doubles match of UWF’s Domenico Sano/Elio Latella versus HP’s Yann Renault/Adriano Locorotondo went down to the wire with UWF winning 9-8 (9-7).

Starting the singles play Bruno Savi, UWF’s #1 player and the number 1 ranked player in Division II all year, faced HP’s Petr Michnev, the number two ranked player, and won 6-2, 6-2. With UWF up 4-0 a seeming rout was on. This writer was watching on the Internet at NCAA TV and there was a rousing chat going on between 2 UWF fans and and an HP fan. One fan of each side said he was a former player. The HP fan said watch out for the HP singles players. This match was far from over. And was he ever right.

HP won the #’s 3, 4 and 5 singles in straight sets and was up the first set at #2. UWF had won the first set at #6. The next hour or hour and a half swung back and forth as UWF’s #13 ranked Tony Rajaobelina battled tooth and nail with HP’s #15 ranked Jaume Martinez-Vich at #2 singles. Meanwhile at #6 UWF’s Elio Latella couldn’t put away HP’s Clemens Graute. Finally, UWF’s Rajaobelina pulled out the 5th point to win the championship with a 2-6, 6-4, 6-3. Latella was still battling at 7-5, 6-5 when the final point was won.

At the tourney, UWF’s Savi was named ITA National Senior Player of the Year while UWF Coach Derrick Racine was named the ITA National Coach of the Year.
UWF head coach Derrick Racine sat down for an interview with WUWF’s Bob Barrett to reflect on the undefeated, national championship season. To hear this interview click on the link below:
wuwf.org 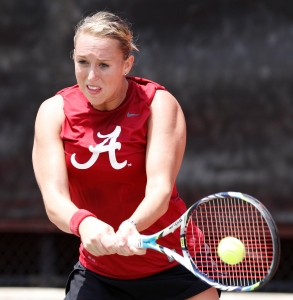 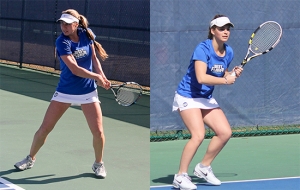 The University of West Florida women’s tennis team had two players named to the 2014 Intercollegiate Tennis Association All-America teams. Monika Kochanova (Slovakia) and Laure-Eline Faure (France) were named to the All-America team for the first time in their respective careers.

Kochanova finished the season with a 16-4 record at No. 1 singles and ranked 6th nationally.

Kochanova and Faure ended the season ranked No. 5. 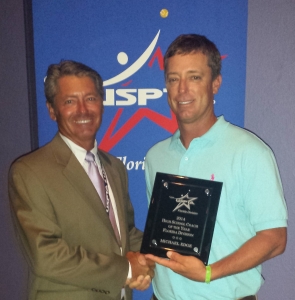 Five hundred ten children attended the first three days at Roger Scott. Began in 1977, this free tennis clinic offers complimentary tennis instruction to any child between the ages of 6-12 in several areas of town. Each year the Racquet Round-Up introduces the game of tennis to well over 400 young people.

Players each receive a goodie bag after their clinic. There are also refreshments at all the sites. Over the years several Pensacola-area tennis players that got their starts at Racquet Round-Ups eventually played tennis in college on scholarship. 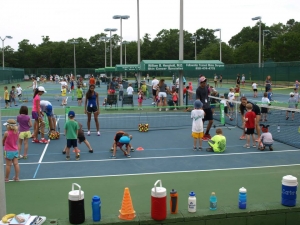