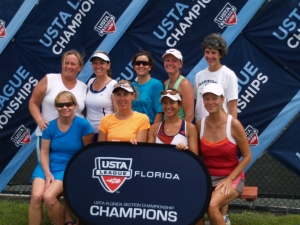 Who says practice and determination doesn’t pay off at some point in time? The women’s USTA League 40 and Over 4.0 team, captained by Sue James, is finally headed to USTA League Nationals in November in Palm Springs, California after cruising to an 8-0 record locally and after winning sectionals in Daytona in late July.

It has been a long journey for this team, known to many as “The James Gang,” that was formed in 2003 with five of its current 12 players consisting of Sherry Cady, Hope Suber, Sue James, Theresa Harrell, Wanda Peterson, Jackie Larson, Tiffany Jones, Susan Morton, Margaret Stephens, Diana Johnson, Suzanne Kirayoglu and Ellen Day.

The team first started going to sectionals in 2010 but never got out of their flight until 2013. The team was unlucky last year as rain caused their last flight match to start at 12pm followed by the semifinals that was held the next morning — leaving nothing left in the tank to compete. Sue felt like the team was on the brink of winning last year had it not be for the inclement weather.

Fortunately, this year proved to be just the opposite. The biggest break this year came when the rain delayed Brevard County’s eventual quarterfinal win. That pushed the championship match back to later on the final day. Tallahassee rested while Brevard was forced to play the quarterfinals and then the semis before going into the finals all on the same day.

During the wait, Sue’s team became more convinced that they weren’t going to be denied a championship this time around. That conviction drove the team to beat Brevard decisively 4-1. What made it even more special was the fact that they won on Sue’s birthday.

As Sue said, “I have always been captain, our mojo is monkeys, and over the years we have developed quite a collection. This group is not only a group of awesome people but great competitors. We like to travel and play competitive tennis, we have great team chemistry.”

Some of the players still can’t believe they are finally going to nationals.

“I guess it was karma,” said team member Wanda Peterson. “It was our day to be the right team to have the breaks go our way. “We’ve been together so long that we have confidence in ourselves.”