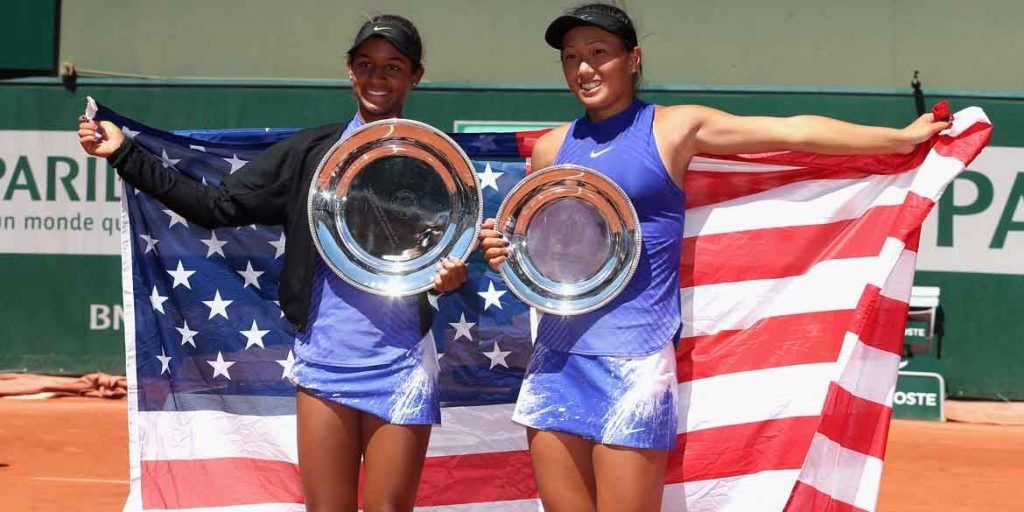 “I think actually me and Claire are going to go into the town and we’re going to go to dinner,” a smiling Osuigwe said of her planned celebration dinner. “I just know her because I travel with the USTA a lot. So she’s been on some of the trips with me. I have roomed with her a couple of times.”

Following her victory the 15 year old said there was no decision to be made in regard to turning pro — it’s a done deal.

“Actually, I have already turned pro,” she said. “It’s a decision I have made. I have been doing well this year so I think it was the right one.”

The teen is ranked No. 1099 on the WTA rankings after three ITF-level pro events in Tampa and Orlando this year. Her best result was beating the No. 1 qualifying seed in Tampa where she qualified to the main draw and lost in the second round. Last year as a 14 year old she twice qualified at ITF events and reached the quarterfinals in Evansville, Ind., and Bethany Beach, Del.

Osuigwe, playing in only her second junior Grand Slam tournament last week, was seeded No. 7 and was pushed to three sets in her first three matches in the Roland Garros girls’ field.

The last time two American girls reached the final of the same junior Grand Slam was in 1992, when future US Open champion Lindsay Davenport beat Julie Steven in New York. It was the first U.S. girls’ winner at the French Open since another Florida player, a 13-year-old Jennifer Capriati, won in 1989. Osuigwe joins Capriati and Anne Smith (1977), Kathy Horvath (1980) and Bonnie Gadusek (1981) as U.S. winners of the French Open girls’ title.

Osuigwe entered the event as the No. 5 junior in the world and a member of the Team USA National Junior Team.

In the boys’ doubles final, Tampa’s 18-year old Vasil Kirkov and 17-year old Danny Thomas of Columbus, Ohio, lost to the top-seeded pair of Nicola Kuhn of Spain and Zsombor Piros of Hungary 6-4, 6-4.