Today was a hectic one from start to finish. We practiced early…8am…then I dashed off to a captains’ meeting. There are 13 nations in the Connolly Cup. USA has won the Connolly Cup seven straight years and now we are aiming to make it eight in a row. The seeds are: USA, Gr. Britain, France, Australia and Switzerland.

There are three round robin groups of three teams and one of four. There was a coin toss to decide who went into the RR group of four teams. France won the toss and ended up in the group of three, putting Australia and Switzerland in the group of four. The rest of the teams were drawn randomly and Turkey and Netherlands ended up in our round robin group. We have a bye tomorrow and play Turkey on Tuesday, starting at 11:30 am.

Susan and I dashed off to Boca Raton to take some photos of all the teams there. It took a bit longer than expected but we got some good shots and got to see everyone, which was fun. We dashed back to BallenIsles (at the speed limit of course!) and got there in time to march into the stadium for the opening ceremonies. This is always a special time, to march in behind your country’s flag, it’s our Olympic moment.

There was a nice opening ceremony and lots of spectators. We marched in behind the USA flag to loud applause…it was really special to play at home in the USA! After the Star Spangled Banner and speeches, thanking the ITF, USTA, the club and sponsors, there was a cocktail party and lots of catching up with old friends from around the globe. 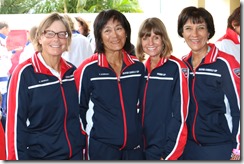 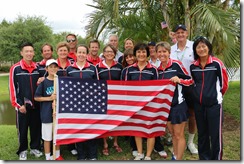 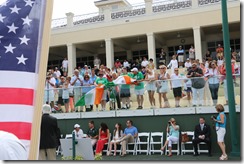 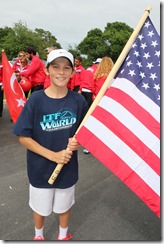