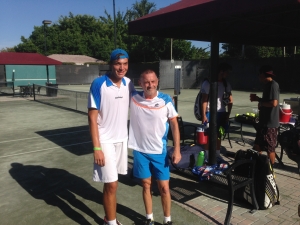 LAST MEN STANDING: Champion Martin Redlicki (l.) and Mikael Pernfors, (r.), whose “”Sweed-ish” volleys took him all the way to the finals.

Modern singles tennis is said to have begun in the 1870s in Birmingham, England as lawn tennis. Then the hard court evolved, followed by the clay court. Now, we have the “Krass” court.

The “Krass” court, you ask? That’s one-on-one doubles, the brainchild of Ed Krass, founder and director of the College Tennis Exposure Camp, whose 10-year-old singles game is played on a doubles court requiring two players to serve-and-volley and hit cross-court.

A one-on-one $4,000 doubles tournament, played at the Hawks Landing Tennis Club in Plantation on April 5, offered between 40 and 100 points for circuit ranking, and drew former world-ranked singles player Roscoe Tanner (once ranked world No. 4, and an Australian Open winner), and Sweden’s Mikael Pernfors (one-time world No. 10 and a French Open finalist). The latter, now 51, lost in the finals to Martin Redlicki, an 18-year-old who won the boys doubles at the US Open juniors last summer with Kamil Majchrzak of Poland. He’ll be giving collegiate players a devil of a time as he plays for the Duke University Blue Devils this fall. 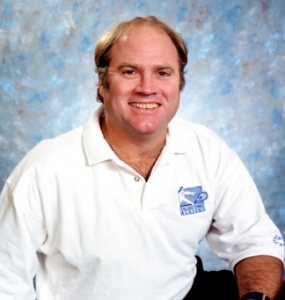 Because the players are only using half a court, it’s easier for senior players, whose legs may no longer be what they once were, and for those hobbled by injury, said Andy Lake, tennis director at Hawks Landing, and co-tournament director with Krass. Juniors, used to living at the baseline and banging out groundstrokes, hone their volleying skills and transition games from the baseline to the net, he added.

“Coaches have been drilling players this way for years,” said Lake, himself a 2003 USTA Gold Ball Slam winner (in the 30s). “What Ed has done is draw up the rules for a new game.” The new game “teaches you to focus better on the ball, and make more careful and accurate shots,” Lake added.

Pernfors, a self-described “counter-puncher” who played “an all-court game” when he was on the ATP tour, played a lot of doubles growing up in Sweden and on the tour.

“Once you know that most shots are either volleys or ground strokes coming right at you,” said the current Vero Beach resident, “there aren’t a lot of surprises or court to cover. “As a result, adjusting to one-on-one-doubles has been very comfortable for him.

According to Roscoe Tanner, now 62, “all I did was serve great and volley” during his heyday on the ATP tour. So the adjustment to this game wasn’t very challenging. The big server said that he’s currently No. 2 in the world in the ITF rankings in the 50s. 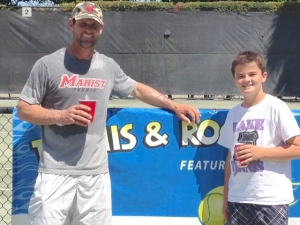 THE APPLE DOESN’T FALL FAR FROM THE LAKE: Co-tournament director Andy Lake and his 12-year-old son Thomas, who was one of the event’s qualifiers.

Merging sports with entertainment, the matches are played to the accompaniment of music (usually live), creating a truly party-like atmosphere, nothing like the hush of what tennis fans are used to. Krass brings in a rockin’ blues band because “someone has to lose, so that’s why we play the blues,” says the natural-born tennis rapper. In the 1870s, Krass said, a Frenchman said that tennis must be played quietly, “but he ain’t around any longer,” so “since silence is lifted, our third game is gifted.”

If you’d like to find out more about this gift of a new game, check out www.oneononedoubles.com.