Some of Craig Cannon’s fondest memories are from being a junior tennis player in Ocala.

“When I was 9, I started taking free tennis lessons offered by the city of Ocala on a cement court with a chain link fence for a net,” the now 58-year-old lawyer recalls. “Barry McKelvey ran the free lesson program and would come to the city courts with a car trunk full of old wooden racquets, a basket of tennis balls and some ribbons for prizes.”

Just a year later, Cannon played in his first tournament – the Ocala Boys Hardcourt Championship. That blossomed into him playing several more tournaments, high school tennis for Forest High School, and even trying his hand out at coaching.

“I started coaching and giving lessons in high school through the same free tennis program that taught me how to play,” says Cannon. “I worked with McKelvey in this program for a couple of summers before I went to college.”

Cannon played tennis while attending Washington and Lee University in Lexington, Va. When he graduated, he worked as a tennis teaching professional for five years before he attended the University of Florida College of Law to become a lawyer. Despite the career change, Cannon is still heavily involved in tennis and plays at Ocala’s Fort King Tennis Center.

“I coached four years of my daughter’s high school tennis team, and we made it to the State Tournament two years in a row,” he says. “When I turned 50, I started playing age-group tournaments again. I still play three to four times a week.”

Two years ago, Cannon approached the Ocala Tennis Association about sponsoring a local junior tournament to help spark more interest among young players in the area.

“Growing up in Ocala we had the Marion County Junior Tennis Championships every year,” he shares. “I recognized that we did not have that type of tournament here anymore.”

Instead of restarting that exact same tournament, Cannon took a different route and decided to introduce something new to the area. The Titans of Tennis tournament includes level-based gender-neutral play in red, orange, green, and yellow ball divisions.

“He wanted the cost to be either very low or free so that it could be completely inclusive,” says USTA Florida Adult Play Coordinator Leigh Chak. “We are lucky to have such a great junior advocate in our area.”

The Titans of Tennis tournament led to the creation of another tournament, the Ocala Junior Jamboree, and both are now held annually and sponsored by the Cannon Law Firm. The tournaments have also been successful in sparking interest in junior players – according to local tennis professionals, they’ve seen a significant increase in the number of juniors participating in the tennis programs they offer in the area. 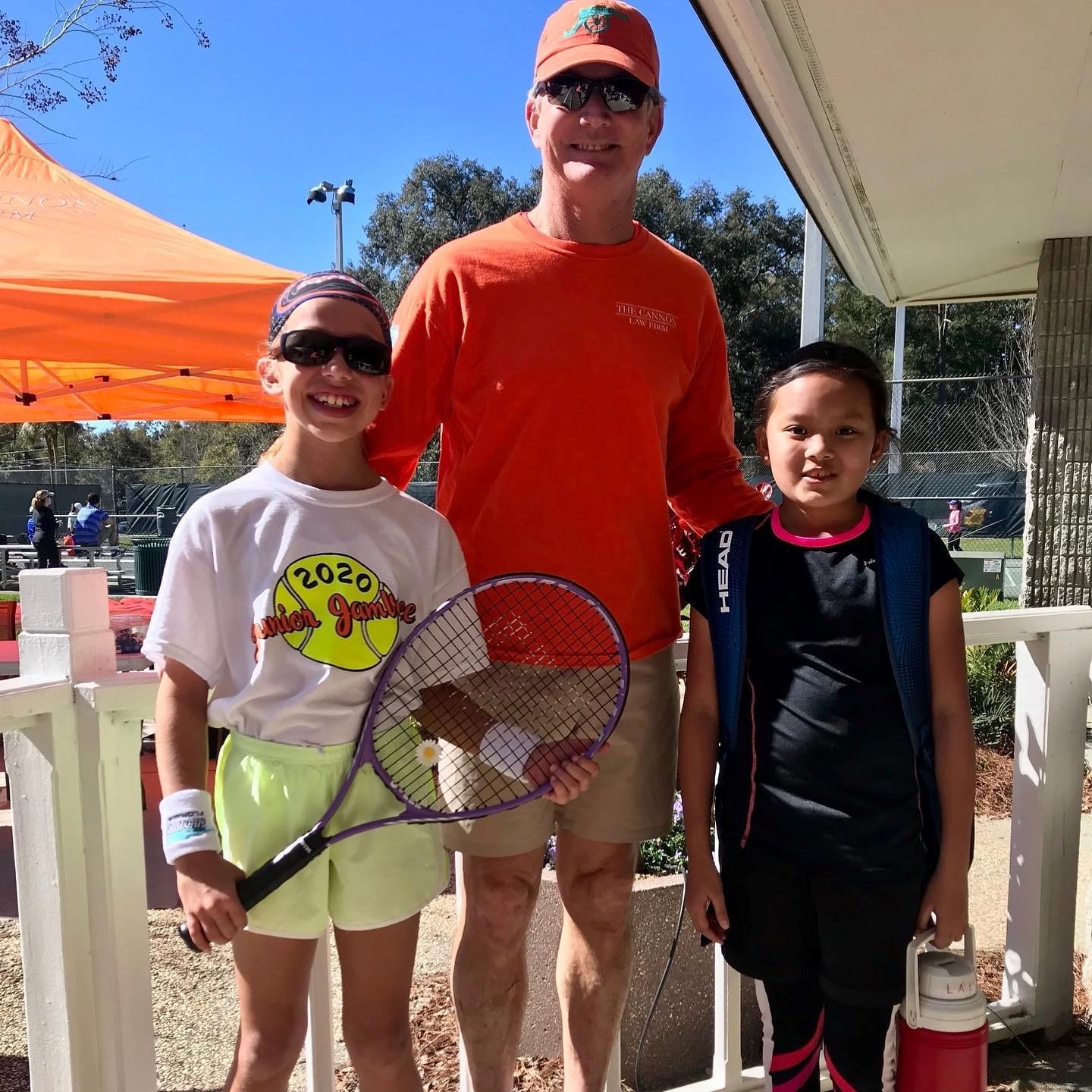 Cannon’s drive to give back to the sport he loves comes, in part, from his friend David Bullock, who passed away in 2013. Bullock, a tennis player who earned the honors of All-District, All-State and All-American, gave free training clinics to the local Ocala junior players at the time and never said no to a match, even when they weren’t much of a challenge for him.

“David mentored me through high school and college tennis,” shares Cannon. “Because of him, I believe I have a responsibility to give back to the juniors like he gave back to us.”

Now, Cannon periodically trains with Ocala’s top local juniors, some of whom have gone on to become college players. He has served as a mentor for the local Junior Team Tennis and high school programs, which both run out of the Fort King Tennis Center. When the JTT program first started, he sponsored t-shirts for all the players. More recently, he has provided scholarships to some players.

“Since there is a cost to the program, I have paid for some players who would otherwise not be able to play,” he says. “I have also paid for players to participate in the week-long summer camps that are held. On occasion, a teaching pro will ask for help getting a racquet or some shoes for a player who cannot afford it.”

“I think it is important to give back to your community,” says Cannon. “Tennis has been and is a big part of my community.”

USTA Florida thanks Craig Cannon for his commitment to expanding and supporting junior tennis in Ocala and Marion County.

My earliest tennis memory was…”Taking free tennis lessons from Barry McKelvy at Highlands Elementary School on a cement tennis court with a chain-link fence as a net.”

If I could play tennis with three people, they would be… “John McEnroe, David Bullock (my friend who passed away a few years ago), and Andre Agassi.”

When I am not playing tennis I am… “Working as a lawyer and doing things with my family.”

My best tennis memory is… “Hard to pin down but teaching tennis at Wild Dunes in the late 1980s was a lot of fun.”

I like to volunteer in tennis because… “Tennis has been an important part of my life and I believe it is important to give back to my community.”