The league format is a modified World TeamTennis structure with men’s doubles, women’s doubles, mixed doubles and some singles. All levels are welcome. Play is on Friday evenings at 6 p.m. and matches are played on either the courts at Amelia National or the Plantation at the Omni. We currently have four teams in this league.

If you have any interest in joining the fun, please contact Carson Phillips at phillips@ustaflorida.com or go to www.ustaflorida.com/contacts/carson-phillips and we’ll find a team for you to play! 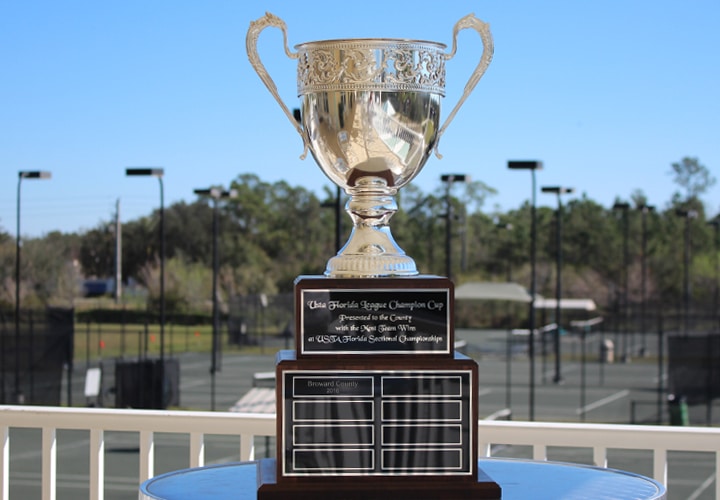 It’s October and Duval County is again in the running to win the USTA Florida League Championship Cup Race for 2018!

The USTA Florida League Championship Cup is annually awarded to the county with the most league sectionals titles during the league sectionals championships season. We got off to a great start in April with our 65 & Over 6.0 women winning at sectionals. It was Duval County’s sixth title in that division in the last seven years! Way to go ladies from the Southside Tennis Center!

We then followed in May with our 55 & Over 3.0 girls, again from Southside Tennis Center — must be something in the water there we need to drink!

We slowed down in June and July but came back strong in August with four winning teams from the two weekends of 18 & Over sectionals. The 2.5 ladies from Deerwood Country Club, the 4.5 men and 4.5 women from Glen Kernan Country Club, and the 5.0 ladies from Florida Yacht Club all claimed sectional victories. That is such a wonderful accomplishment and we are so proud to have these teams as part of our community.

After the first Mixed 18 & Over sectionals in October, Duval County was tied with Hillsborough County with six titles each. Trailing closely behind tied for second place with five titles each was Pinellas County and the two-time defending Cup champion Broward County.

Go team DUUUUVAL! Bring us home those last wins to put us over the top!