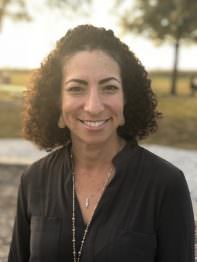 From starting tennis to keep her mind off her husband’s military deployment in Afghanistan to winning local leagues and eventually playing the Florida championships at the USTA National Tennis Center, Cynthia Martinez in a short time has experienced some of the best that Florida league tennis has to offer.

Now the Tampa resident is captaining multiple teams to share the “tons of fun” she says league play has to offer.

After winning her local league in her first year of USTA League play in North Carolina in 2009, she stuck with tennis while her military relocations took her to Georgia, South Carolina and eventually to Tampa.

“I also played during both my pregnancy,” Martinez said. “Nothing like a pregnant lady on the courts.”

When she moved to Tampa in 2014, “I became really involved in the community that I live in. I really wanted to play mixed doubles, so I started up our community mixed league. The guys wanted to play and didn’t know how, so I started a men’s league as well. This past summer I venture out and put together a women’s Combo League which was tons of fun, and currently I also captain our community women’s 3.5 league as well as our 8.0 mixed league.”

Thus far in 2018 Martinez has played or captained on 11 teams. Last year she saw her women’s and men’s USTA League 3.5 teams as well as the women’s 6.5 Combo win locally and advance to sectionals at the new USTA National Campus in Orlando.

“Not only was I able to play at this amazing facility with my women’s team, but I was also able to make the line-up for the men’s team as well and experience that with them — super cool,” she said. “It was the first time for the teams [at sectionals]. It was such a thrill.”

Now into her fourth year of captaining, Martinez says the Tampa tennis community has become her extended family.

“I am a lucky girl indeed,” she says. “I am so blessed to be surrounded by wonderful friends that are also my tennis family. However, the only reason I can do my job effectively and be a good captain is only because I have the most amazing teammates around me. They are always flexible to the changes when needed. Also, my partnership to Eva Caudell and Wendell Xiao. Without their help and patience none of this could have been possible. We work together to have such fun teams. I’m truly grateful for their friendship. And most importantly my family, their selfless support and unconditional love keeps me going everyday.”

“It is a lifetime sport and I am so glad I started to play.”

USTA Florida congratulates Cynthia Martinez as the Florida Tennis Volunteer of the Month for February 2018 for captaining USTA Leagues teams to share her love for the sport in the Tampa area.

“I love promoting the sport and putting teams together — it’s so much fun!”

If I could play tennis with three people, they would be…”Venus Williams, Roger Federer and the amazing Bryan brothers, who happen to be cousins to a good friend of mine, but never had the opportunity to meet, yet.”

When I am not playing tennis I am…”A mom of two wonderful children, Julian and Emma. I enjoy spending time with friends and family. We enjoy the outdoors, going to the park, kayaking and riding our bikes.”

My best tennis memory is…”Being able to have both women’s and men’s 3.5 teams at USTA Florida League Sectionals at Lake Nona this past summer. That was pretty cool and exciting.”

I like to volunteer in tennis because…”It is actually a lot of fun. I enjoy meeting new tennis players and getting people out on the courts. The great thing about tennis is that there is always something to work on and improve. It is a lifetime sport.”