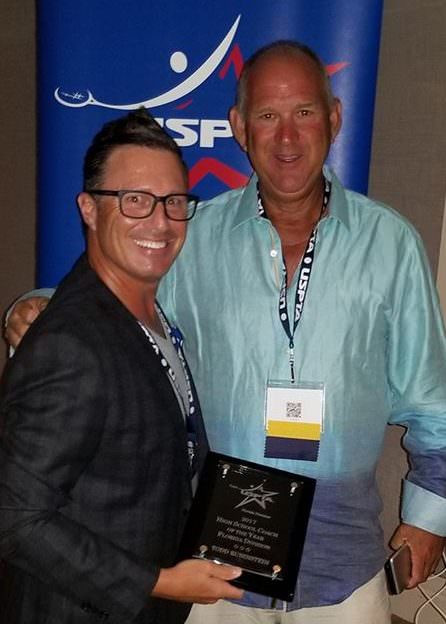 Todd Rubinstein of Miami received the USPTA High School Coach of the Year Award at the USPTA General Membership Meeting, held during the 2018 Tennis Teachers Conference at the Grand Hyatt in New York City prior to the start of the US Open.

He has coached the school to its two lone state tennis championship titles, winning more than 400 matches in the process.

“I am beyond flattered and sincerely grateful to receive this unbelievable recognition, as it’s truly the pinnacle of a lifetime’s work in the industry,” Rubinstein said. “It takes a team of selfless individuals to achieve success at any level and without my remarkable team, this incredible honor could have never been possible. I want to thank the best athletic director on the planet, Latoya Williams, Principal Christopher Shinn, the rest of the schools’ administration, teachers, trainers and staff for everything they have helped me achieve. Every parent and player, past and present, for trusting me in the process and as well, my incredible family for supporting me over the years.”

He is also the head teaching professional at the Lauderdale Tennis Club in Fort Lauderdale, was a Team USA Head Tennis Coach at the 20th World Maccabiah Games in Israel, is a USPTA Elite Professional/APC, a USTA High Performance Coach, and just recently finished serving a three-year term on the Tennis Advisory Committee for the Florida High School Athletic Association (FHSAA).

For more info go to www.uspta.com.