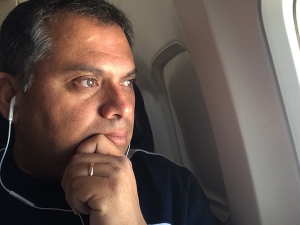 My last day in Acapulco, I packed up my things and checked out of the hotel before noon. I knew I didn’t want to take my luggage, backpack and briefcase with me. The front desk gladly took my backpack and luggage and stored it for me until that evening when I would get back to claim it before heading to the airport. I downsized on my last day and didn’t take the monster backpack and only took the “essentials,” camera, telephoto and wide angle lenses, memory cards, battery and a couple of other things.

One “essential” that I forgot in the backpack though was my “Prensa” (press) vest. So I apologetically asked the driver of the hotel shuttle once on the road to get back to the hotel so that I could bring it with me. I knew that I had to turn it in and also had to wear it to shoot the matches.

I had mixed feelings on the shuttle to the tournament site. On one hand I was happy to start the trip back home that evening and on another I was sad that it would be my last day shooting. Taking tennis action photos is addictive and so is following the players from court to court, whether in practice sessions or official matches. You feel camaraderie with all the other press folks, in my case, with the photographers. We are all in the photo pits clicking that shutter thousands of times, we are all in pursuit of that special photo, of capturing that special moment. Some photographers may have better cameras or bigger lenses than others, however at the end of the day, we are all in the same boat.

For my last day I wanted to capture a few around the courts images so I put on my wide angle lens and walked around the grounds. I then got to see the sea and the beach with the palm trees, on a beautiful sunny and clear day. What an amazing setting for a tennis tournament for the players I thought. They stay at a first class hotel, they have the beach, they don’t have to leave the premises to “do their job.” If that’s not tennis heaven I don’t know what is.

I then ended up in a smaller court where for a few minutes I saw Donald Young practicing with a young fellow. His mother Illona was supervising the practice. Donald played later that evening against Gilles Simon and the steady Frenchman came out on top 6-3, 6-4.

After that I made a quick pit stop at the press room, changed to my telephoto lens and proceeded to walk to the courts. You always know that some player is practicing somewhere. If they play later that day, the chances are that they are practicing earlier in the day. I ventured to the Grandstand where I caught Sam Querrey practicing with what seemed younger players. At the end they asked Sam for a photo with him, my guess is that they were up-and-coming players. Just as Sam and coach were walking off another player came in, I didn’t know him but I figured someone will show up to practice with him, who could it be?

And that someone was none other than Genie Bouchard, and I was the only photographer at the Grandstand, I figured other photographers would eventually walk in. I stayed for her entire practice session and no one came to shoot.  It was around 2ish or so if I recall correctly and shooting with daylight it’s a lot easier than shooting at nighttime which I had done with Genie’s match against Shahar Peer the night before. She had an intense practice session, went through every facet of her game starting with foot drills and definitely looked the part. No wonder she’s the new tennis girl…she has the looks, the talent and the game.  What a reward I thought, on this my last day at the tournament, I shot Genie’s practice session and I had her all to myself! I then left to see what else was out there. I walked with a swagger…I was the man!

I ended up going to the press room to cool off for a bit and work with my laptop. Once there I figured it was time to return my locker key and claim my 50 pesos deposit back. I also had with me my Press vest to return. I thanked Marlene, the lady in charge of the credentials, for the opportunity and the nice time had and asked her if I had to return my vest. She sort of asked whether I needed it and hinted that it would help them to have it since more credentialed people would come later in the week and could use it, and I obliged and gave it back. Looking back I regret not keeping that vest, it could’ve been a special souvenir from the tournament, shoot, where else am I going to get one like it!?

I said to myself, let’s just get more photos, and headed to center court where Ferrer was playing my traveling buddy Feliciano (see Blog # 1). Once in the pit the security guy asked me to wear my vest, since I didn’t have it anymore, I was just wearing my credential and told him I would be there for just a few minutes. Luckily he sort of remembered me from the day before where I had forgotten a monopod at the pit and he had put it aside for me. Otherwise he probably could’ve kicked me out of there. OK, back to the match, the first set was tight, it got to 6-all at which point David took command of the tiebreak and the match, Feliciano was done. The final score was 7-6(1), 6-2 in favor of Da-veed.

Do you think I left once and for all after that match? Not so fast, I went to see Genie’s match at the Grandstand against Lara Arruabarrena of Spain. Since I had shot Genie’s earlier practice session I didn’t intend to stay long there, I was tired, moreover, I figured Genie had seen enough of me earlier in the day too. I’ll just point out that Genie had a makeshift version of the “Genie Army” for the match. They didn’t look quite as sophisticated as the official Genie Army, they had a small yellow sign, they weren’t quite as “professional.” It was neat to see that kind of support nonetheless. I stayed for a couple of games at most and after that I was done for good.

I left the premises, looked for and got on a taxi, and headed for the hotel. Once there, I reclaimed by belongings, got on the hotel shuttle that took me to the airport and smoothly traveled and got to Mexico City around 10:30 p.m.

At that point, I was very thankful to my brother Luis for having reserved a hotel room (another Holiday Inn) on my name using his frequent traveler miles. My flight to Miami was scheduled for the next morning at 9:45 a.m., thus spending the night at a hotel room was a lot cozier and safer than sleeping or ‘trying’ to sleep at the airport.

I will spare you all the details of my traveling day.

I will just say that as I was flying over the Gulf of Mexico en route to Miami, and I reflected over my experience of the last few days, I felt very fortunate to have had the opportunity to travel to Acapulco for the Abierto Mexicano de Tenis as a credentialed photographer.

It has been the experience of a lifetime, an opportunity that may never come again. I hope it does and that I can continue to keep shooting tennis tournaments or tennis players in some capacity. Who knows, only time will tell.

Tennis has given me so much and it will always be in my heart and mind.

I hope that you have had as much fun reading about my adventure as a tennis photographer as I have had writing about it.