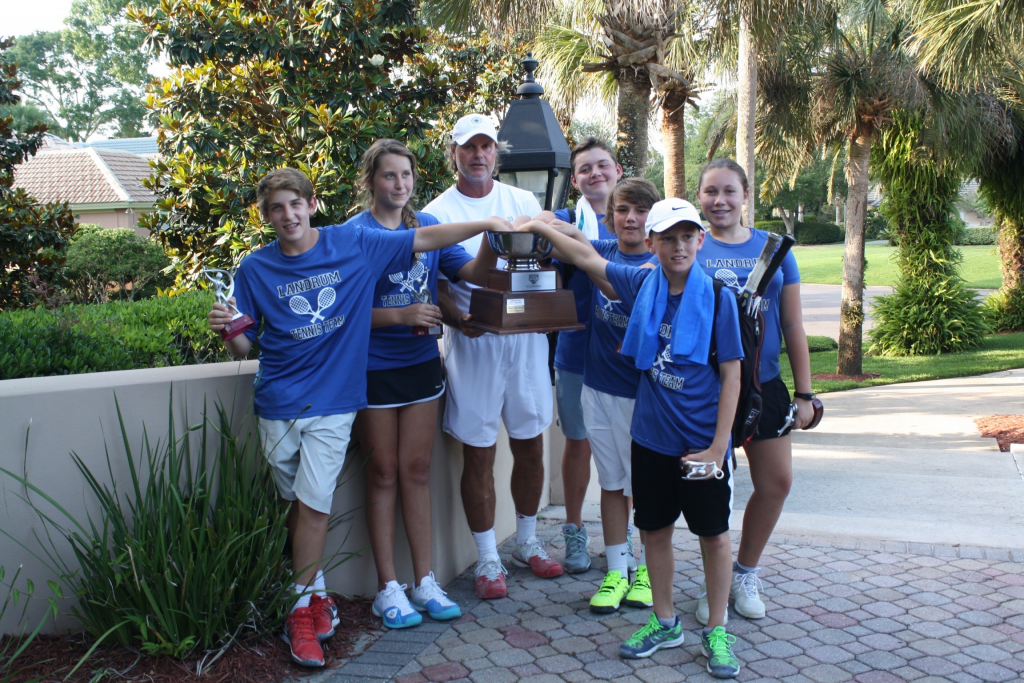 The champs from Landrum Middle School

The first-place teams in the North and South divisions faced off at the end of the school season, and Landrum Middle School from Ponte Vedra Beach, Fla., was the winner of the St. Johns Middle School Athletic Association (SJMSAA) tennis season for the 2014-15 school year.

Local high school coaches scouted players at the event hosted by The Plantation at Ponte Vedra and Director of Tennis Jeff Millaire, also the Landrum coach, and assisted by Coach Lars.

The Murray Middle School team plays out of Marsh Creek Country Club in St. Augustine under the guidance of Director of Tennis John Jacobson. Pacetti Bay is coached by Director of Tennis at Palencia, Tom Salmon.  All the coaches were present at the event and teams were cheered by parents, grandparents and siblings.

“This was the fourth season of tennis through SJMSAA,” said league advisor Diana Gardner. “There were 128 players on 14 teams. Eight schools participated, including the recently-opened Valley Ridge and Patriot Oaks Academy. Try-outs were held in February followed by two weeks of practice prior to the match season. The teams are co-ed, and the format is the best 2-of-3 6-game sets of two singles and two doubles, with total games won determining final standings.”

SJMSAA is an independent, non-profit organization, which offers after-school sports for middle school age children in St. Johns County, located south of Jacksonville, Fla. Each sport has a “commissioner” who coordinates the sport with the help of volunteers. Kathy Hawkins, an avid player whose husband and four children also play tennis, has been the tennis commissioner for three years.  She is assisted by Cheryl Olson, Christy Handley, and Diana Gardner who serves as an advisor.

The program will expand in 2016 to include Cathedral Parish School located in St Augustine, students from Harbor Island Tennis Center, and a third team from Switzerland Point Middle School in Fruit Cove, Fla.

“Discussions are also in progress to have a regional end-of-season playoff with the Gainesville middle school league,” Gardner says.

For more information go to www.sjmsaa.com/tennis.