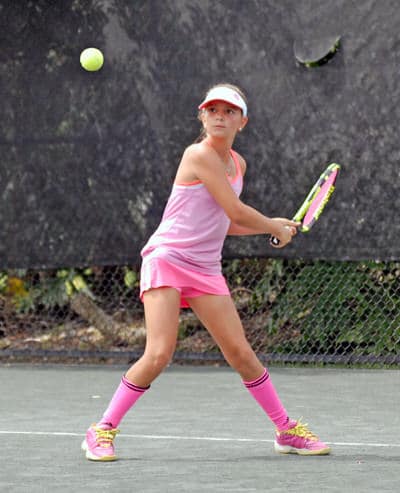 Ten-year-old Regina Alcobe-Garibay wants to make her final year in the 10-and-under division a big one this weekend at the USTA Florida “Bobby Curtis” 10 & Under Green Ball Sectional Championships at the Florida Tennis Center in Daytona Beach.

“I think I will make it to the finals,” says the confident Miami resident, who qualified for the event by winning the Lowell’s Little Legions Level 6 (10&U Regional Qualifier) in April in Plantation, Fla. There she did not a drop a set in round robin play, nor in winning her quarterfinal, semifinal or final round. In the championship match she defeated fellow Miami resident Victoria Miranda 4-2, 2-0, retired, in the short-set scoring format.

Players age 10 and under can qualify for the USTA Florida “Bobby Curtis” 10 & Under Green Ball Sectional Championships by winning or reaching the final at any of the 16 ‘Level 6 Designated’ events held throughout the year in the Florida Section.

While this year she has won two 10 & Under Super Series events, Regina has also been working on game changes to help her compete at higher levels.

“I spent the summer changing my forehand grip and my volleys,” she says.

Later this year she looks forward to competing at the prestigious Jr. Orange Bowl tournament, and in 2017 would like to see more kids on the courts.

“I love tennis,” says Regina, who practices at Tropical Park in Miami with coaches Kiko Montana and Tom Pudge, “and would like more kids playing.”

For more info go to www.ustaflorida.com/event/2016-10u-green-ball-sectional-championship.