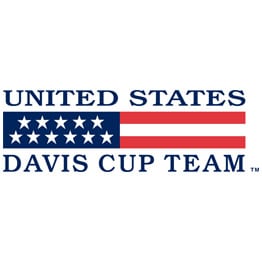 The USTA and United States Davis Cup Captain Jim Courier announced on Monday that world No. 28-ranked Jack Sock of Tampa, No. 38 Sam Querrey, No. 47 Steve Johnson, and No. 68 Donald Young will represent the U.S. in the 2015 Davis Cup by BNP Paribas World Group Playoff against Uzbekistan.

The best-of-five match series will be played on an outdoor red clay court at the Olympic Tennis School in Tashkent, Uzbekistan, on Sept. 18-20.

Johnson and Querrey will likely see themselves on doubles duty in Tashkent. The pair, unseeded at the US Open, upset the No. 1-seeded Bryan brothers in the first round, and on Monday moved into the quarterfinals.

The United States has never faced Uzbekistan in Davis Cup competition. The U.S. fell to Great Britain 3-2 in the World Group First Round in March in Glasgow, Scotland. The winner of the tie qualifies for the 2016 Davis Cup World Group, while the losing nation will compete in its respective Zone Group I competition in 2016 and not potentially be eligible for the World Group until 2017.

Tennis Channel will provide live daily coverage. Sock and Johnson will both be making their Davis Cup debuts. Querrey is a career 6-8 in singles for the U.S. Davis Cup team, while Young is 1-2 career.

Practice partners for the U.S. Davis Cup team will be juniors Taylor Fritz and Michael Mmoh. Fritz, 17, was the No. 1-ranked junior in the world this summer (the first U.S. boy since Young in 2005). Mmoh, 17, was a 2015 French Open boys’ semifinalist and ranked No. 3 in the ITF World Junior rankings this summer.