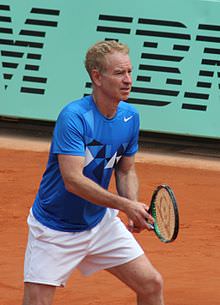 International Tennis Hall of Famer and 17-time Grand Slam champion John McEnroe will return to Delray Beach for his fourth appearance in the tournament’s ATP Champions Tour event on Feb. 16-18, 2018 at the Delray Beach Stadium & Tennis Center in Florida.

“I look forward to returning to Delray Beach for another ATP Champions Tour event,” McEnroe said. “It will be five years since my last tournament in Delray Beach but nothing has changed. I am working hard to bring my best tennis to the fans and show the younger guys I can still beat up on them and help my USA teammates win the competition.”

The action will kick off Friday night (Feb. 16) at 6 p.m. with Fish vs. Levine followed by McEnroe vs. Rusedski in the 8 p.m. featured match. For a complete schedule of all ATP Champions Tour and ATP World Tour matches, or to buy tickets go to www.YellowTennisBall.com.