“It’s Another Game” – Cancer No Match for League Tennis Player Thanks to Teammates, Family

Editor’s Note: It’s with great sadness that USTA Florida has learned that the Broward County Tennis community has lost one of its most influential and dedicated members, Lili Gonzalez. Despite being diagnosed with cancer, Lili supported all of her teams and traveled for every event. Tennis was her place to escape and helped her remain a positive influence on those around her. We will miss Lili Gonzalez and are extremely grateful for everything she has done for her community and the sport of tennis.

“When they started talking to me about tennis – a sport I had never been interested in – and how much fun I could have, I was intrigued.”

It took several years of driving past the Midtown Tennis Club in Broward County before Lili Gonzalez stopped in to see what they had to offer. What she found there still resonates with her today.

“I joined the club and signed up to learn how to play tennis,” says Gonzalez, who had played a little bit in Venezuela before she moved to the U.S. in 1995. “After I tried it, I loved it. It’s very social; I love to have a bunch of friends and people around.”

Now six years later, Gonzalez is a USTA League team captain at the Frank Veltri Tennis Center in Plantation. The road to get to where she is today though, hasn’t been easy.

The 50-year-old joined her first USTA League team in 2015, where she learned not only a lot about the sport, but also about competing. She enthusiastically helped organize a women’s 3.0 team and in the following season, she became the captain.

“We had a really good team and today we are really good friends,” recalls Gonzalez. “We won the season in our local league, and we were going to Daytona for the Sectional championships.”

While the team trained for sectionals, Gonzalez noticed she was having some health issues and decided to go get checked out by a doctor. What she learned was something she didn’t expect.

“I was diagnosed with an aggressive form of breast cancer that metastasized to the lymph nodes,” she explains. “The news was devastating, and the prognosis was grim.” 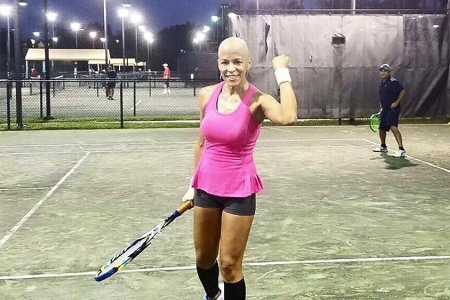 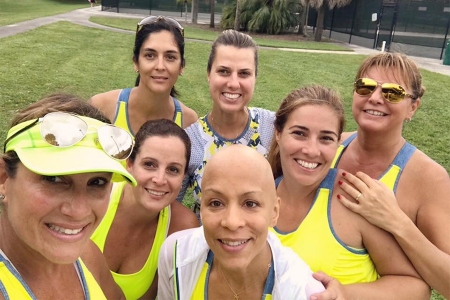 Despite the shocking diagnosis, Gonzalez still made the trip to Daytona to support her team from the sidelines. When she returned to South Florida, she endured a long bout of chemotherapy and radiation.

“I had times where I couldn’t walk,” she recounts. “Treatment by treatment I got better. I started playing a little bit here and there. I’d go with my girls to the club with my bald head, but I didn’t care.”

She didn’t care because tennis was what kept her going throughout her diagnosis and treatment. For Gonzalez, she knew she had a sport she could play, even when she wasn’t feeling on top of her game. It wasn’t just “her” sport either – her husband and son started playing tennis after she got involved in USTA Florida Leagues, and on top of the support from her family, she had her teammates helping her stand tall.

“It’s really important to know they’re here for me and they’re cheering for me,” said Gonzalez. “If I’m down they’re there for me to support me and to lift me up. It’s a family – I would say it’s my second family. My boys, my husband, and my girls.”

Gonzalez had a double mastectomy in 2017 and underwent a few more surgeries in 2018, all while still representing Broward County on the tennis court. By this point, Gonzalez was actively rostered on several different teams, and even when the emotional and physical side effects were too draining, she would still travel to all matches and championships, book rooms, cook, and cheer for her teams. It’s a gesture that did not go unnoticed. 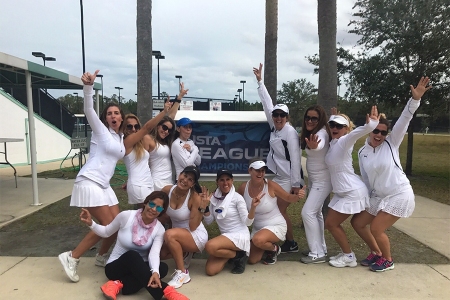 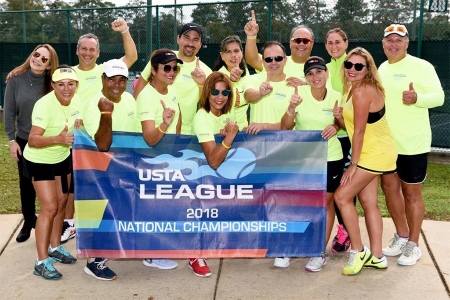 “We have a great leader here,” says teammate Sigal Sasson. “Lili is an example I think for many girls and many women, and it’s not only in terms of sports but in terms of our perspective on life.”

“Playing tennis with Lili helped me realize that it’s not so important how many days are in our life, it’s more important that in everyday we have real life,” echoes teammate Natalia Frantsevskaya.

After a long battle full of treatments and surgeries, Gonzalez was advised her cancer was gone. She celebrated throughout 2019 by being active with several teams out of Frank Veltri, including a women’s 3.5, mixed 6.0 and 7.0, and combo 6.5 and 7.5, the latter of which was set to attend Sectionals. While training in early December, she received more news she didn’t want to hear – that she developed secondary liver cancer from her primary breast cancer.

“The moment I got the news I was worried – not about me but about my family. But a second after I was like ‘it’s okay; it’s another battle, it’s another game, it’s another thing that I have to do and do my best to stay positive.’”

Now a few months later and still in treatment, Gonzalez is out on the court practicing the sport she loves with the teammates who have become her family.

“It’s something that is good – we work our minds, our hearts, our bodies, and it’s amazing and it’s friendship and it’s everything together,” she says. 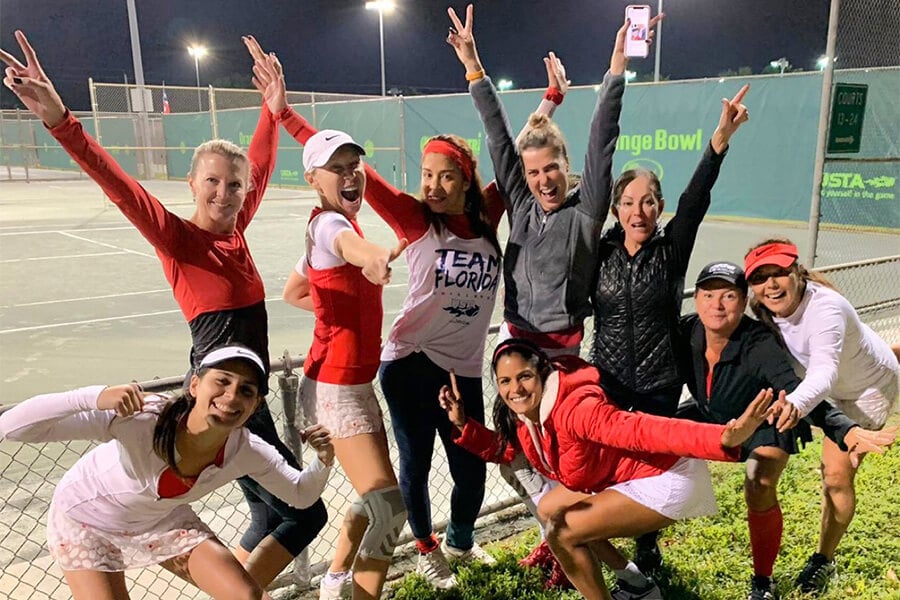 Dec. 3, 2019, the day after Gonzalez was diagnosed with secondary liver cancer

For Gonzalez, it’s been a long four years. She believes the years have been more bearable though thanks to the help that the sport has provided. If she’s tired, she can get her racquet and go hit some balls. If it’s too sunny and she can’t be out for too long, she can still play with her shade. And even though she may not be on the court at Sectional events, she’s always thinking about what she can do for her teammates.

“I cannot tell you how much tennis, my friends and all the players from the different USTA League teams in Broward have supported me in this incredible journey,” says Gonzalez. “I continue to thank them and all my wonderful tennis friends that have helped me get here today.”

Now full of positive energy and support from her family and teammates, Gonzalez is sure she will make it through this latest battle.

“I’m not scared of anything. I don’t think it’s something that’s going to win against me,” Gonzalez says. “I just need to keep a positive mind, I need to be strong, and life is good what can I say?”