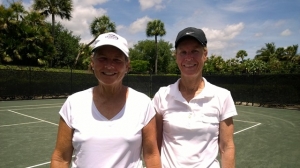 Today many of the players learned that the really loud siren going off during a match wasn’t an obnoxious car alarm after all…it was a lightning warning and meant we should immediately leave the court till there were three short sirens, as an all clear.

I was in the middle of my quarterfinal match when the sirens blew the first time; we left the court, showered and the all clear sounded. I had won the first set and was down in the second. It was very windy when we began to play but finally calmed down once we returned, and that was to the advantage of my opponent, Chris French. She really upped her game after that and beat me handily in the third, with penetrating forehands and backhands deep in the court.

By the end of the match it was nearly dark due to the ominous clouds blocking the sun, and the lightning sirens blew again.

My doubles partner Pam and I headed over to PGA about 5:30; we were scheduled to play doubles at 5, but my match lasted so long (over three hours) that we weren’t going to be starting till after 6. The skies opened up as we were leaving BallenIsles where I’d played my singles match, en route to PGA National, where we were to play our doubles. Shortly after we arrived we were told that play was cancelled for the day so we have yet to play a doubles match this week.

We ran into one of our doubles opponents there, a woman from the Netherlands and she commented on Pam’s bright orange shirt. The Dutch national color is orange, and we were going to wear their national colors when playing them, but since it rained, we have to go for plan B.

In other action, American  Tracy Houk beat the top seed, Brenda Foster in three sets to reach the 50s semis; Fran Chandler also advanced in the 50s; Mark Vines edged Peter Markes in the men’s 55; Susan Wright, Tina Karwasky and Diane Barker all advanced in the women’s 55s; Patricia Zerdan won her 35s match to advance to the final; Julie Cass advanced in the 45s to the quarters along with Jenny Klitch (who won yesterday); Simona Bruetting/Gee Gee Garvin won their doubles today in the 35s (reaching the semis) as did Barker/Wright.

Oren Motevassel advanced, but Mike Fedderly fell in two close sets to Glenn Busby of Australia; Andy Lake (Florida)  won his 40 singles; Danny Waldman also advanced in men’s 55 singles. Many of the doubles and mixed were rained out, at least at PGA for the evening.

We are hoping to play doubles tomorrow…

To see the draws, click here (and make sure you click on “order of play” which brings up another menu; click on “draws” on this second menu.