A crowd of 5,544 was on hand at the Delray Beach Stadium and Tennis Center Saturday, Feb. 15, to see Delray Beach native Coco Gauff face off against NCAA Division 1 champion Estela Perez-Somarriba from the University of Miami at the 2020 Delray Beach Open.

The sold-out exhibition match also made history as the first women’s match to ever be played as part of the ATP Tour’s Delray Beach Open.

“It felt great. I felt like it was picture perfect that the Delray native gets to play the University of Miami student. It was pretty local for both of us,” Gauff said. 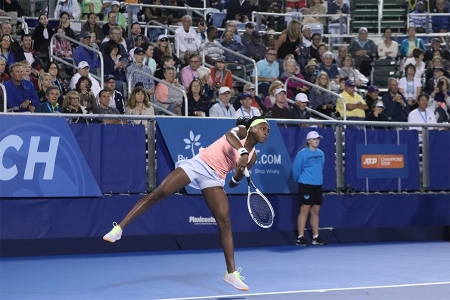 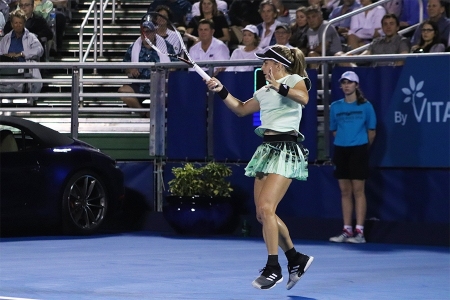 15-year-old Gauff defeated Perez-Somarriba 6-3, 6-3 under the stadium lights and in front of the roaring crowd. For Gauff, who has played at the U.S. Open, Wimbledon, and most recently the Australian Open, this exhibition match felt a lot different.

“I was actually a little bit nervous today because of the crowd,” Gauff said after her victory. “You don’t want to let your home town down. I’ve played a couple exhibitions but this one definitely felt a lot different from my previous ones. It was something I was happy to do.”

🎤 “It’s just so special to play in the first women’s match on this court.”

It’s no secret that Cori “Coco” Gauff has captured the attention of tennis fans around the world and in her hometown. She made her splash on the tennis scene last year at Wimbledon, receiving a wild card into the singles qualifying tournament where she won consecutive straight-set matches before defeating Venus Williams in the first round and advancing to the second week. In January of this year, Gauff reached the fourth round of the Australian Open where she lost to the eventual champion and fellow Floridian Sofia Kenin. The former no. 1 junior in the world has risen from 686 in the WTA singles rankings prior to Wimbledon to her current ranking of No. 51.

Although Gauff had a home-court advantage with numerous family, friends and fans cheering her on in the stands, Perez-Somarriba had thunderous support from her UM teammates, who made the drive from Miami despite a scheduled match at Georgia Tech only 24 hours earlier.

What an incredible night.

“This was quite an experience. The crowd was amazing,” said Perez-Somarriba. “My UM team was here to support me and I could hear them every point. I don’t think I’ve smiled so much on a tennis court… Coco is such an inspiration, she’s so amazing. Hopefully I get to face her again in the future.”

Perez-Somarriba, a UM senior and the 2019 NCAA Division I singles champion, is coming off of one of the best seasons in her collegiate career, boasting a 43-5 win-loss record in singles during the 2018-2019 season. Perez-Somarriba is the third player in program history to reach the Sweet 16 three times and the second to do so in back-to-back years. Her goal this year is to repeat as the NCAA singles champion.

With nothing important on the line at this match, something both Perez-Somarriba and Gauff are accustomed to in their respective playing careers, both were able to be a little more relaxed on the court.

“Today was definitely a more relaxed situation than I’m used to… it was pretty vocal for both of us,” said Gauff. Both of us had fun and her team was here, so that was pretty cool. I’ve been a UM fan for a long time so when I found out I was going to play her it was pretty cool.” 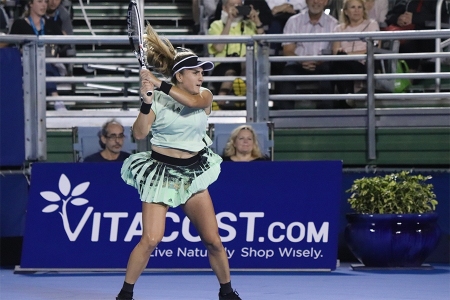 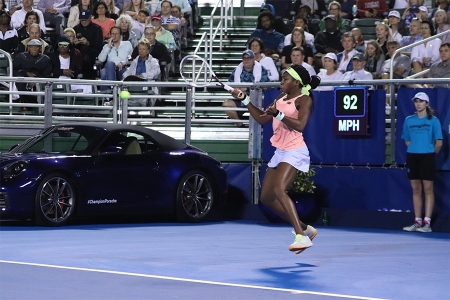 Gauff also expects the two to cross paths again in the future.

“She’s going to go pro, so I’m sure I’m going to see her and probably play her (again) where we’re both a little more serious,” Gauff said of Perez-Somarriba. “She has a bright future.”