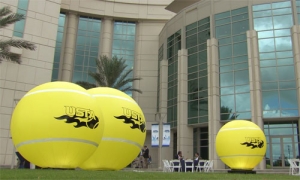 One hundred-plus tennis courts, a $60 million construction cost, and a number of tantalizing intangibles are set to make the new USTA national “New Home of American Tennis” in the Lake Nona region of Orlando the biggest game changer in U.S. tennis development since…well, ever.

The announcement in May by the USTA set late 2016 as the completion date, but USTA Florida will provide you with an inside look at what will easily be the largest tennis center in the U.S., and what it will offer above and beyond the standard training and facilities.

“It’s going to raise the bar for tennis, not only in Florida but throughout the United States,” said USTA Florida Executive Director Dough Booth. “People are going to visit the facility then go back to their communities and say, ‘We want similar quality courts in our community.’ It’s going to grow tennis throughout the country, and be one of the finest tennis centers in the world.” 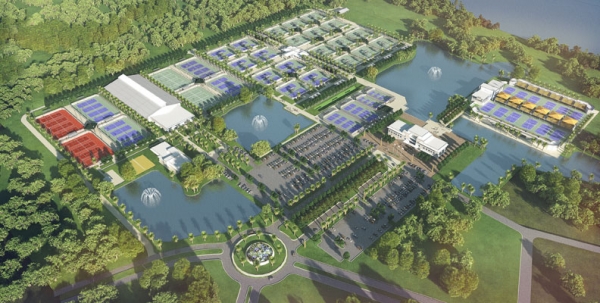 From the artist rendering above you can see the general layout, and some changes will be made between now and major construction beginning early next year (minor changes to the entrance have already been made to ease traffic congestion). From the campus layout you get the general feel how this game-changing facility will impact American tennis from the grassroots level to adult and youth recreation, through to professional development. 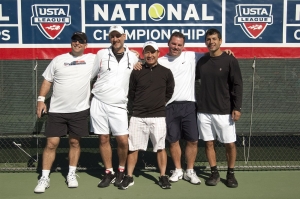 Cool off in one of the many player pavilions or shaded areas, or if the heat is really getting to you, park yourself in front of one of the numerous NFL-type misting fans. During your match enjoy filtered water stations on every court.

When your match ends, plug a USB stick or storage device into a data port and download a video of your entire match. The complex’s Tournament and League Area will feature 24 clay courts, 16 hard courts, two player pavilions and more. After your match, head out to one of the restaurants or cafes on site.

Planning also includes a hotel and convention center to be constructed next to the USTA facility.

Not all USTA League National Championships will move to the complex, as USTA officials estimate roughly 10 percent of events will relocate to Orlando.

BRINGING IT ALL TOGETHER — PRO AND RECREATIONAL TENNIS 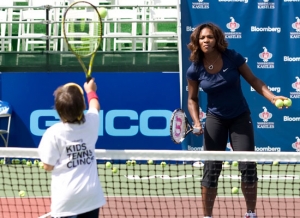 One of the greatest advantages of the facility will be a never-before-seen centralization and harmony of U.S. tennis training at virtually all levels. Recreational and pro coaches, juniors at all levels, college players, professionals in training — the many divisions of tennis development rubbing shoulders and taking advantage of shared coaching resources and education.

“It’s going to be great to have little kids show up that are just beginning tennis, and walk 100 yards and see our best players in the country practicing and training,” USTA Player Development, General Manager Patrick McEnroe told USTA Florida. “Because of the amount of courts, facilities, obviously the weather, all the things that we’ll have here, I think it will enable us to do our job a lot better.”

That job will include developing the next generation of U.S. pros through a High Performance and Player Development Area with eight hard courts, eight red clay courts, and six indoor courts for the USTA Player Development division. Dorms in this section of the facility will house 32 boys and girls with a state-of-the-art strength and conditioning area.

“The options and the range of things we can do here with having so many courts, the different size [Youth] courts as well, I think it’s a watershed moment for American tennis,” McEnroe said. “We said, ‘What if we could do these entry-level tournaments for kids, and at the same time the kids could go and watch a collegiate match, or players like Denis Kudla or Madison Keys training?’ I think it’s going to give us the opportunity to bring that buzz to tennis.”

Part of that buzz will be recreational players getting a look at the pro strength and conditioning area. While the beach is a little more than an hour east of Orlando, the USTA facility’s cutting-edge training will include a “sand and workout area” (no word yet if that includes beach volleyball).

THE NEW HOME OF U.S. COLLEGE TENNIS, TOO 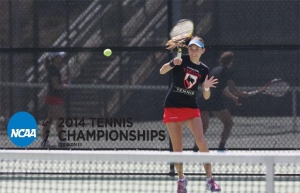 College tennis’ visibility will receive a boost through the Collegiate Tennis Area, featuring 12 hard courts and a tournament show court with high-mast lighting for televised events and expandable seating areas. It will feature a two-story pavilion for concessions and more, and will also be the permanent home of the University of Central Florida men’s and women’s teams.

Covered seating sits between the two banks of six courts each, where men’s and women’s matches can be played simultaneously. Elevated seating will host approximately 1,200 spectators.

Bids are being placed to host the NCAA tennis championships, with the event possibly finding a new permanent home in Orlando someday. Just as “Omaha” has become linked to the College World Series or NCAA baseball championships, officials hope the USTA facility and Orlando could someday bring that same cache to the annual college tennis championships. 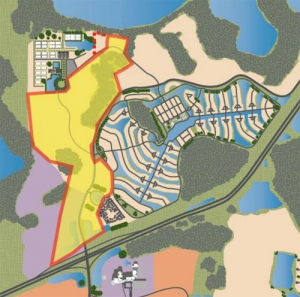 The USTA complex will join an already-established technology and medical mecca in the Lake Nona area nurtured by the Tavistock Group, an international private investment organization which invests in life sciences, resort properties and master-planned real estate developments, along with sports teams and sporting events among other investments.

The Tavistock Group sees the U.S. tennis governing body as the anchor for a “sports cluster” in Lake Nona featuring a number of major sports entities.

“This campus at Lake Nona has all of the ingredients for the beginnings of a world-class sports and human performance cluster with the USTA setting the bar,” said Rasesh Thakkar, senior managing director of Tavistock Group.

The “sports cluster” plan would include, according to Thakkar, cutting-edge sports medicine driven by the USTA complex and other sports entities that Tavistock is currently in discussions with.

“This is meant to unite a real sports and human performance cluster,” Thakkar told USTA Florida. “We’re already talking to multiple organizations that can be part of this campus that will address things like the top training techniques, injury prevention, mental training for competition and for life, and sports science. We could be a mecca for sports medicine, because of the whole Medical City, all on the same grounds.”

Medical City in Lake Nona was brought together by the Tavistock Group, and has become home to some of the region’s top hospitals, universities, research institutions and health and life science companies. Now the region is targeting sports and sports-science integration and training.

Perhaps too ambitious, you say? Before you bet against the region quickly becoming a sports hub, note that once the Tavistock Group set their sights on sports medicine, the community grew to drive more than $7.6 billion — billion with a “b” — in economic activity in Central Florida.

Tennis also has an “in” at Tavistock.

“Our chairman Joe Lewis, the owner of Tavistock Group, to this day plays tennis continually, multiple times a week, and he’s in his 70s,” says Thakkar, whose children also play in Orlando. “It taught me that if there’s a sport that I’m going to pick for my children, hopefully they love it. And they have fallen in love with it. In every way it is just fabulous for life.” 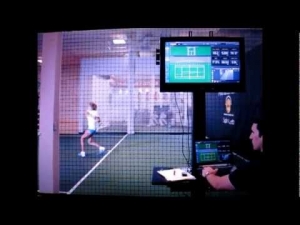 Like the US Open, fans at the Orlando facility attending events will be able to monitor the scores on all courts during USTA League Championships, NCAA tennis events or other tournaments. The facility will be an epicenter for tennis innovation and education, and will incorporate the latest technology to provide cutting edge training and educational opportunities.

“This will be the next generation of technology for tennis,” says Virgil Christian, Director, USTA Community Development & Facilities. “Players will be able to have a lesson and then go plug in their iPad or whatever device and watch it instantaneously.”

Organizers are counting on the already-established Medical City tech sector in Lake Nona helping launch a sports science sector that will be second to none.

“One thing that people haven’t factored in — like with Medical City, the scientists and doctors that have all come here, by the hundreds, how they raised the bar in their own disciplines, the entire city, the entire region,” Thakkar told USTA Florida. “The science programs at the [region] high schools are much better, they have all these scientists involved. What this will do for the world of tennis, in Central Florida, in Orlando, in the state of Florida, I think will be phenomenal.” 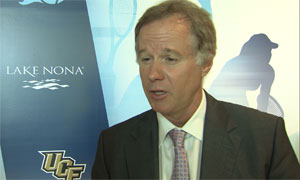 Patrick McEnroe at the press announcement in Lake Nona

What haven’t we mentioned? USTA national will initially move its Community Tennis and Player Development divisions from the current White Plains, N.Y., offices to the Orlando facility.

The 17 USTA Sections throughout the country will be able to take advantage of the Team USA Area. The eight hard courts and eight clay courts can be used by USTA Section coaches and players to work on their own, or collaboratively with USTA Player Development. In the winter, USTA Section coaches and players in northern climates who would find local indoor court costs prohibitive could fly down to Orlando for a week or two to use the facilities at no cost.

The Youth Tennis or 36/60 Tennis area will include eight 36′ and eight 60′ courts, enabling youth players and adults to develop their games.

“Orlando has been a premier attraction around the world for many, many years,” said USTA Florida Volunteer President Bob Pfaender, a long-time resident of the Lake Nona and Orlando area. “It is going to be a great opportunity for the children to have access to the game.”

McEnroe adds the facility will also benefit the coaching industry and coaches training. 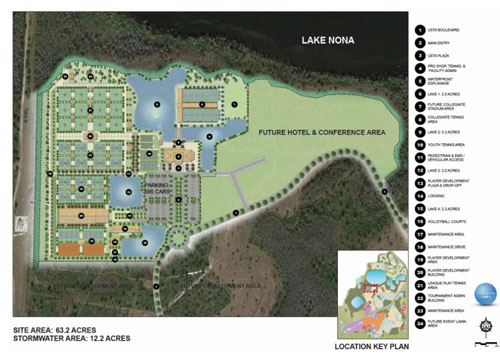 “We are going to raise the bar in everything we do in coaching and educating coaches, so that is going to be a huge part for us in player development, but also bringing in people that want to coach Youth Tennis,” McEnroe said. “We can make that whole pathway a little more seamless.”

The main USTA office building will include a pro shop, fitness room, locker rooms, player lounge, cafeteria, USTA office space and more. The placeholder “The New Home of American Tennis” will eventually be replaced with an official name for the facility.

The Tavistock Group is currently approaching various sports organizations for inclusion in the “sports cluster,” with additional organizational headquarters and buildings to be constructed next to and south of the USTA facility.

What would be some ideal sports organizations for inclusion?

The Golf Channel already has their HQ in Orlando, how about inviting the California-based Tennis Channel to set up an East Coast studio in Lake Nona where they would have access to the top U.S. pros? How about research and development arms of some of the top racquet and tennis technology manufacturers? What about the teaching professional certification bodies, the USPTA (United States Professional Tennis Association) and the PTR (Professional Tennis Registry), setting up headquarters?

The USTA is working with UCF to develop majors related to the tennis business and tennis hospitality, and the servicing of the tennis center will be closely connected to UCF’s Rosen College of Hospitality Management.

The building and campus design will feature modern ergonomic design by one of the nation’s top architecture firms responsible for a number of the largest sports parks in the U.S.

When the groundbreaking occurs at the end of this year, it will be the beginning of an investment from top to bottom in an unprecedented move to grow tennis.

The possibilities only seem limited by the imagination.

Give Us Your Feedback:
What do you think of “The New Home of American Tennis”?
What would you recommend for the facility’s official name?
Share your comments below in the comment section.