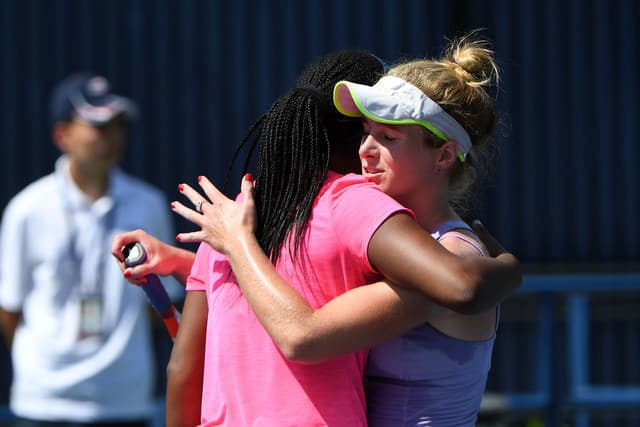 Allie Kiick (right) hugs Victoria Duval after their match in the final round of the 2017 US Open qualifying tournament (photo: USTA)

Florida residents Allie Kiick (Ft. Lauderale), Sachia Vickery (Miramar), and Tim Smyczek (Tampa) qualified to the main draw of the US Open in singles on Friday, winning through three rounds of qualifying during the week to reach the main stage at the USTA Billie Jean King National Tennis Center in Flushing Meadows, N.Y.

They were joined by fellow American qualifiers Nicole Gibbs, Danielle Lao, Claire Liu, J.C. Aragone, and Evan King, making for the most combined men’s and women’s qualifiers at the US Open since the women’s qualifying draw expanded from 64 to 128 in 1998.

The match between the 22-year-old Kiick and the 21-year-old Duval featured two American friends who have survived both cancer treatments and knee injuries.

“When you go through anything tragic, you never know what the future holds,” said Duval, who retired in the second set due to a thigh injury. “Obviously, my goal was to be in the main draw, but I can’t be too upset with how hard I fought this week and how much heart I left on the court…We are both awesome players and fighters, and I am so happy for her and can’t wait to see how she does in the main draw.”

Kiick, returning from injury, entered the qualifying tournament ranked No. 633.

“I wanted to win, of course, but when winning it that way, it is definitely not the way I wanted,” Kiick said. “She is one of my closest friends, especially with everything that she has been through…She is going to do great things.”

Kiick last made a US Open qualifying appearance in 2014 when she retired with a knee injury in her first match.

“It hasn’t really sunk in yet,” she said. “It’s amazing. To be here playing in the Open, it is everything that I could ask for. I did not expect to be out here. I didn’t even expect to be playing tennis this soon, actually. I am honestly just going to enjoy it and everything about it. This is more than I could have asked for.”

The American qualifiers brought the total U.S. men and women in the main draw to 42, the most since 2004 when 45 Americans competed in singles.

Other notable qualifiers were Canadian Denis Shapovalov who upset Rafael Nadal weeks ago at the Canadian Open, and French veteran Nicolas Mahut.