SERENA STREAK ENDS IN MADRID — WHERE DOES IT STAND AMONG STREAKS? 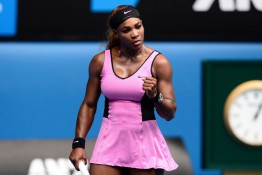 Serena Williams’ winning streak came to an end today at 27 consecutive victories when she was defeated by former Wimbledon champ Petra Kvitova 6-2, 6-3 in the Mutua Madrid Open semifinals. On Wednesday she had saved three consecutive match points to beat former No. 1 Victoria Azarenka, and yesterday she defeated Spaniard Carla Suarez Navarro to stretch the streak to 27. While impressive, the streak doesn’t match up against Serena’s best, much less history. She won 34 matches in a row in 2013, and even that number didn’t put her in the Top 10 for all-time women’s winning streaks. Martina Navratilova has five of the Top 10 longest streaks, including the all-time best of 74 in a row (beating Chris Evert six times) in 1984, a run that included three Grand Slams. Steffi Graf (66 wins in 1989-90) has the second-longest streak. Serena’s run of 27 trails the 10th-longest streak, by Navratilova (39 wins) in 1982-83.

A CHRISTIAN STUDY IN PERSEVERANCE 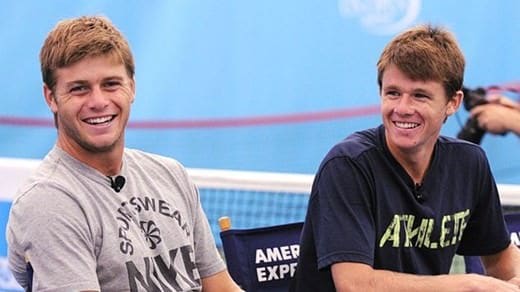 If you get to feeling sorry for yourself when sidelined from tennis with injury, ponder the saga of Christian Harrison, the 20-year-old brother of American pro Ryan Harrison, who trains at the IMG Academy in Bradenton. Tagged by some as a can’t miss prospect, Christian has over the last two years had surgeries on both hips for labrum tears, shoulder surgery, wrist surgery, and surgeries on each leg for abductor issues. This followed a serious leg ailment that sidelined him for two years as a junior, and on top of that of late he has dealt with mononucleosis and sinus surgery. This year he is slowly working his way back, and as Mic Huber of the Sarasota Herald-Tribune details, the youngster won’t take no, or injury, for an answer.

Either Miami’s Katerina Stewart, Plantations’ Allie Kiick, or Louisa Chirico (Harrison, N.Y.) will earn the USTA-designated women’s wild card for the 2015 French Open through the USTA Har-Tru Wild Card Challenge, as all three have reached the quarterfinals at the $50,000 USTA Pro Circuit event in Indian Harbour Beach, Fla. On Friday Chirico will play unseeded Canadian Francoise Abanda, the No. 7-seeded Stewart will meet No. 3-seeded Argentine Paula Ormaechea, and Kiick will face unseeded Aussie Jessica Moore. Stewart and Kiick are one match from meeting in the semifinals and reprising last week’s Pro Circuit Charlottesville final, won by Kiick. Former world No. 1 junior Taylor Townsend, the top seed in the draw who last year won the USTA wild card race for an appearance at Roland Garros, was upset in the first round by 17-year-old Harvard recruit Erica Oosterhout of Tampa. 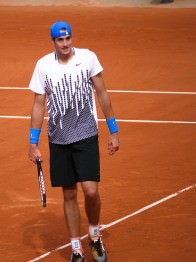 John Isner moved into the quarterfinals at the Mutua Madrid Open on Thursday, taking advantage of a tired Nick Kyrios who defeated Roger Federer a day before, outlasting the Aussie in three sets 6-3, 6-7(7), 6-4.

“For sure he’s a little bit tired,” said Isner who landed 20 aces during the match. “He made the finals last week (in Estoril) and had that incredible match last night against Roger. He had expended a lot of energy, whereas I was feeling great.”

Isner is the first American in six years to reach the quarterfinals of an ATP Masters-level claycourt event. In the Friday quarterfinals he will meet No. 6 seed Tomas Berdych.

In addition to ending her 27 match win streak, the loss by Serena stopped 19 wins in a row in Madrid, and 50 in a row at WTA Premier Mandatory events, dating to 2012.

“We put bows in our hair and paint our faces, it’s so fun. And being on a team, you’re not playing for yourself, but obviously, for your country and I like that. And I play so much better at these things.”
— Former World No. 1-ranked American junior CiCi Bellis on playing in the Junior Fed Cup team format, speaking to zootennis.com 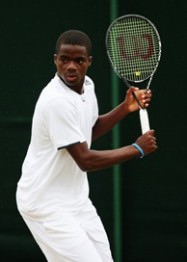 “I mean, she is Taylor Townsend. She has done really well in majors and in juniors, but I was trying to keep that out of my head and just think of her as another girl.”
— Plant High School (Tampa) senior Erica Oosterhout after ousting top seed and former world junior No. 1 Taylor Townsend at the USTA Pro Circuit event in Indian Harbour Beach, speaking to Florida Today

“Davis Cup helped me a lot. Being in that great atmosphere and having the chance to hit with Top 50 guys everyday, being on the practice courts, that gave me a lot of confidence.”
— Tallahassee Challenger finalist Frances Tiafoe on being a U.S. Davis Cup practice partner, speaking to Sports Illustrated