Just as Team Europe won last week’s Laver Cup, this week golf’s Team Europe is hoping to continue the dominance and keep Team USA from winning on European soil for the first time in 25 years. Tiger Woods is unfortunately already off to a rough start. 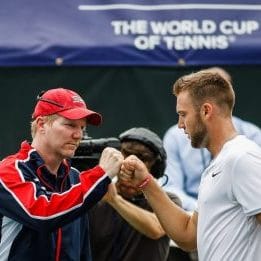 Madrid has been selected to host the first two revamped Davis Cup finals in 2019 and 2020, and the 2019 draw was also unveiled on Wednesday for the new edition of tennis’ premier international competition. La Caja Magica (The Magic Box), the current venue for the joint ATP/WTA Madrid Open, will host next year’s final in November.

Teams reaching the semifinal round of the World Group this year are in for 2019, so Croatia, France, Spain and the U.S. get to bypass the February 2019 qualifying round. Also directly in to the 18-team final are recent champions Argentina and Great Britain, which received wild cards.

Competing in the February 1-2 qualifying round (two additional participating nations, from Europe or Africa, will be named after playoffs in October) for the remaining 12 spots (Top 20-ranked players noted below) will be: Belgium (David Goffin) at Brazil, Serbia (Novak Djokovic) at Uzbekistan, Bosnia at Australia, Italy (Fabio Fognini) at India, Hungary at Germany (Alexander Zverev), Russia at Switzerland (Roger Federer), Netherlands at Czech Republic, Sweden at Colombia, Chile at Austria (Dominic Thiem), Japan (Kei Nishikori) at China, TBD at Canada (Milos Raonic), and TBD at Kazakhstan. Check out the advancement format and rules here. For more info go to www.DavisCup.com.

This summer Wimbledon in Wisconsin debuted as a club unveiled three grass courts surrounded by sand dunes, with a total of nine planned…Happy 37th birthday to Serena Williams who celebrated on Thursday, and is apparently done for the year…Maria Sharapova has also announced she is hanging up her racquet for the remainder of 2018 to get fit for next year…USTA’s Net Generation has reached the 1 million student mark, connecting with more than 1,400 school partnerships across the country…Serena Williams was the keynote speaker a week ago at the National Retail Federation’s Shop.org Conference in Las Vegas…If you can’t make the MaliVai Washington Youth Foundation’s annual gala in October you can still bid on silent auction items online…This weekend the USTA Billie Jean King National Tennis Center will host the Bacon and Beer Classic…According to the Sport Sustainability Journal, the USTA joined NASCAR, Major League Soccer (MLS), and Major League Baseball franchises of the New York Yankees and New York Mets to finance 7,252 cookstoves for economically-deprived nations in Kenya, Malawi, Mozambique, Zimbabwe and India to offset their own unavoidable carbon emissions…The public can now book court time on the USTA Professional Development red clay courts at the USTA National Campus…If you’re around Northeast Florida the weekend of Oct. 6 check out the One-on-One Doubles Shootout in Ponte Vedra Beach…Billie Jean King and her partner Ilana Kloss are now part of the ownership group for the MLB Los Angeles Dodgers and the WNBA’s Los Angeles Spark…With some of the same features as the USTA National Campus, a 50-court tennis center is coming to Raleigh, N.C…The new Davis Cup format means the ITF will be able to put an additional $25 million into growing tennis around the world…Rafael Nadal, who retired during the US Open semifinals citing his chronic knee issues, is targeting a return in October at the last regular-season event on the ATP calendar, the Paris Masters, right before the season-ending ATP World Tour Finals…Tennis can extend your life by 10 years says this study. 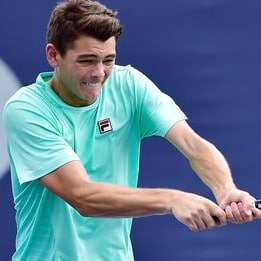 Unseeded Taylor Fritz moved into the semifinals of the Chengdu Open in China on Friday after grinding through an all-American meeting against unseeded Sam Querrey 7-6(1), 7-5.

It was the first tour-level meeting between Fritz and Querrey. The effort will solidify Fritz’s efforts to qualify for the Next Gen ATP Finals in November, featuring the Top 7 21-and-under players on tour and a wild card. Fritz is currently at No. 6 in the standings, one spot behind fellow American Frances Tiafoe.

In the Saturday semis the 21 year old will stack up against No. 1 seed Fabio Fognini.

Unseeded Mackenzie McDonald was the last American to exit the Shenzhen Open in China on Thursday, falling 1-6, 7-6(1), 6-0 to No. 7-seeded Aussie Alex de Minaur.

“There’s certainly more diverse activity from an ethnic standpoint since they came on the scene. At junior tournaments at higher levels, they’re more diverse ethnically than they were in the past.”
— D.A. Abrams, chief diversity and inclusion officer for the USTA on the Williams sisters, speaking to the Chicago Tribune

“Every single match that I’ve ever played, I’ve been so nervous. Last year, before the US Open final, I was literally almost in tears, although I had already played six matches on the exact same court…I always play my best tennis when I’m relaxed and remembering how much fun I’m having.”
— Madison Keys on overcoming nerves, speaking to Refinery29

“I feel like there’s a lot of growth still to go in my game. That’s the most exciting part.”
— Serena Williams, who will look to tie the all-time Grand Slam singles title record at the 2019 Australian Open