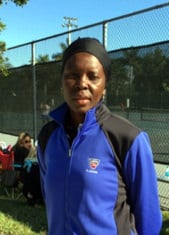 Celebrating Black History Month in February, the African native feels strongly about the annual recognition of the contributions of people of color to improve lives in the U.S., while adding, “We celebrate all of our tennis players, regardless of race and gender.”

After sending two children to Division I programs in two different sports, being named high school tennis coach of the year and attracting the attention of the USTA Florida Coaches Commission for her high-producing juniors, the humble pro has made a name for herself in tennis circles.

“Sibo is so unusual in that she is a black women in a predominantly white male-coaching fraternity, establishing herself as a respected professional whose volunteer participation on the USTA Florida Coaches’ Commission and Youth Tennis Progression Regional Advisory Group will have wide-spread impact,” said Lyn Bruner of the local Lee County Community Tennis Association. “She works tirelessly on behalf of our sport.”

Kangwa originally came to tennis through her Davis Cup-playing husband Patrick, who she met while competing for the Zambia National Volleyball Team at the Olympics-style All-African Games, while he competed in tennis.

“After we married, Patrick constantly teased me about volleyball, and that I needed to pick up a racquet, not realizing that I would actually do so and end up loving the sport,” she said.

The couple emigrated to Florida, and after her new friends repeatedly asked her to play tennis, she said “the rest is history.” Tennis became a family affair, and Kangwa eventually began teaching and coaching high school tennis.

All three of her children played high school tennis, among other sports. Daughter Muki played Division I volleyball, and daughter Thandiwe plays Division I tennis at Seton Hall. Kangwa was named high school coach of the year her first year, and is currently in her third year as coach at the Canterbury School.

Her teaching and organizational expertise led to her being named the tennis director at Three Oaks Park in Fort Myers.

“I became a [high school] coach because I like to teach,” she says. “The transition to tennis director and working with the Lee County Community Tennis Association crew has been wonderful. We have re-started Junior Team Tennis locally, we have already had two entry-level tournaments, and have lots of exciting events planned, including a ‘Rally the Family’ event on March 13.”

Kangwa volunteers with the USTA Florida Coaches Commission, sought out by the Florida Section after one of her proteges caught the eye of USTA Player Development.

“It is an exciting honor and opportunity to work with this group of amazing coaches who are focused solely on growing our sport in a responsible and proactive way in Florida,” she says. “I am enjoying learning from members of the coaches commission after having a chance to be a part of the player development camps, and coaching at the first USTA Zonals competitive camp.”

As a coach who began working with very young players, Kangwa enjoys working with players age 10 and under, who she sees as the future players and ambassadors of the game.

“My love of tennis and time spent volunteering on the court isn’t just about tennis and the game,” she says. “It is about teaching life lessons to players of all ages, but most especially our young ones age 10 and under.”

USTA Florida congratulates and thanks Sibongile “Sibo” Kangwa as the February 2016 Volunteer of the Month for giving back to her community above and beyond her work in the tennis industry. 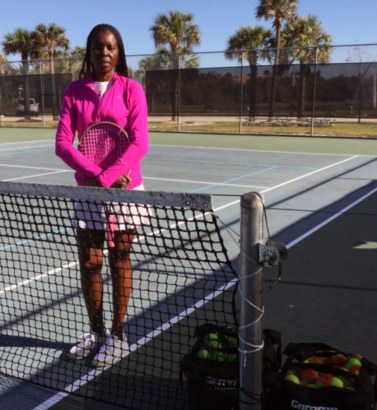 If I could play tennis with three people, they would be…“Roger Federer, Steffi Graf, and Venus Williams.”

When I am not playing tennis I am…“cooking and reading.”

My best tennis memory is…“of the first time I played on a USTA League tennis team.”

I like to volunteer in tennis because…“tennis has given our family so much. My husband and his brothers all had an opportunity to come to this country on tennis scholarships and/or to teach tennis. My own children are all high-level players and their tennis lives helped shape who they are off the court.”