The earliest tennis memory for many people usually involves their first time hitting a ball, taking the court, or a flashback to watching a tennis legend of their childhood. For David Harrison, it looks a little different.

“My earliest tennis memory was buying a racquet at 13 years old so I could ask a girl out who played tennis,” recalls Harrison, who grew up along the Susquehanna River in Columbia, Pa.

Harrison’s genuine introduction to the sport was in August 1999 at the age of 37. He was already participating in wheelchair rugby when he attended a sports expo after a flyer advertised wheelchair tennis. The instructor, Kati Yerg, had Harrison hitting balls from the baseline almost immediately.

“Once I knew there was a local clinic, I was hooked,” says Harrison, who now calls Fort Lauderdale home. “I’ve been going to that same clinic weekly now for over 22 years.” 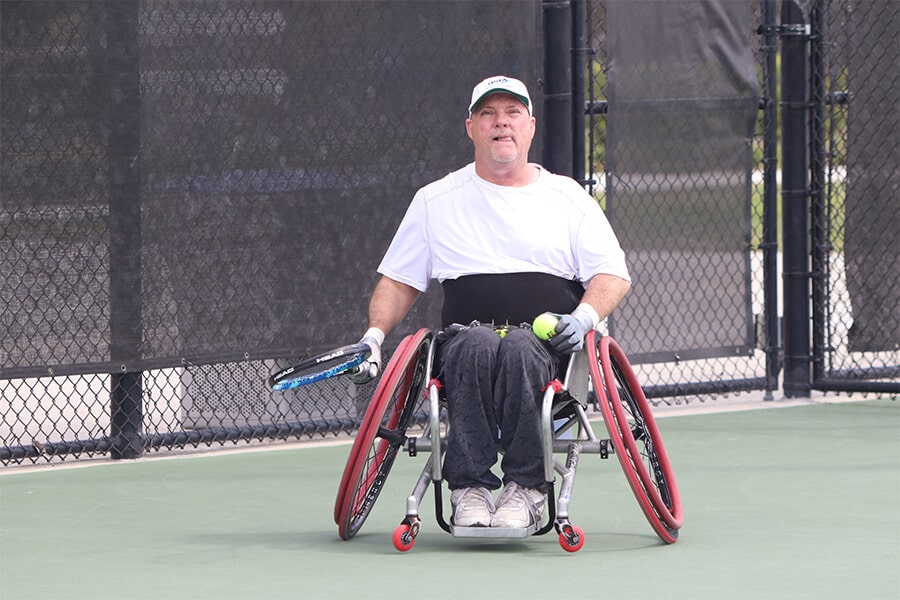 Since then, Harrison has been an active wheelchair tennis player collecting wins on and off the court. The former US Open semifinalist and former No. 8 in the world in the Quad division most recently captured the quad singles and doubles titles at the 2021 Music City Classic in Nashville. He’s traveled across North America playing tournaments and has met people from all over the world.

Harrison has also been an involved wheelchair tennis advisor and volunteer in his local community for 20 years, providing a spark for the sport in Southeast Florida. He makes his way around several facilities – the Patch Reef Tennis Center in Boca Raton, Pioneer Park in Deerfield Beach, Frank Veltri Tennis Center in Plantation, the George English Tennis Center in Fort Lauderdale, and the Palm Beach Gardens Tennis & Pickleball Center – offering his assistance when it comes to wheelchair tennis.

“Dave Harrison contributes to what the local wheelchair scene needs most: participation,” shares William McDermott, Recreation Supervisor of Tennis Programs at the Palm Beach Gardens Tennis & Pickleball Center. “He leads by example as a ranked player. He participates in exhibitions. He actively welcomes and encourages newcomers. He helps other players with chair fitting and repair. He recruits for wheelchair events and assists Jim Tierney during those events.”

The itch to volunteer started from day one when he recognized that all the coaches and instructors were volunteers. Harrison has always been extremely grateful for their time and commitment and felt it was only right to help wherever he could.

“I don’t think it’s fair for one person or a coach to be expected to do everything,” he says. “I like to help our coaches with communications amongst players with everything from court conditions and weather to upcoming practices and tournaments and rallying for participation.”

If players don’t own a wheelchair outfitted for tennis, Harrison dedicates his time to make sure there is a decent loner chair that can be provided. He scavenges old chairs for parts in an effort to secure a few functional extra chairs, just in case a new player comes in. He also fervently promotes participation among new and older players as much as possible.

“New players can get a bit overwhelmed with the drills and maneuvering of the chair on the court,” he shares. “I try to help the coaches convey the proper techniques by demonstration.”

When it comes to growing the game amongst wheelchair players, it’s a hefty undertaking. There are far less players with mobility impairments than able-bodied, so finding new ones and maintaining a core group can be challenging. Harrison says the ideal way to expand the wheelchair tennis space is by recruiting players from existing wheelchair sports programs.

“Wheelchair sports such as basketball, rugby and sled hockey have many players who participate 100%, but don’t get as much playing time as the starters. That can lead to some frustration and cause someone to start looking for other sports options,” he says. “With tennis, obviously it’s still giving 100%, but it also solely relies on how much you want to compete or play. You can hit on a wall or ball machine in no opponent can be found.”

USTA Florida thanks David Harrison for his devotion to encouraging new and old players to get back on the court and for his commitment to growing wheelchair tennis across Southeast Florida.

My earliest tennis memory was… “Buying a racquet at 13 years old so I could ask a girl out who played tennis!”

If I could play tennis with three people, they would be… “Roger Federer, David Wagner and Camille Giorgi.”

When I’m not playing tennis I am… “Playing poker or listening to music.”

My best tennis memory is… “Having an undefeated season in doubles which culminated with a US Open championship with my good friend Troy.”

I like to volunteer in tennis because… “Drawing from a much smaller pool of players, I like to try to help encourage and support new and older players to stay active in this sport.”