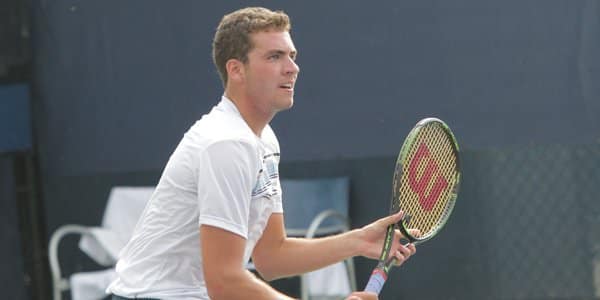 Former NCAA singles champion and Virginia native Ryan Shane captured the title on Sunday at the Tallahassee $25,000 Futures tennis tournament, upsetting No. 3-seeded Kaichi Uchida of Japan 7-6(3), 6-1 in the final for his second USTA Pro Circuit win of 2017.

The 24-year-old No. 6-seeded Shane during the week received a walkover win against No. 2 seed Mats Moraing of Germany, and in the semifinals defeated No. 8-seeded fellow American Ulises Blanch 6-4, 7-5.

Two years ago Shane led the University of Virginia to the NCAA team title before defeating Noah Rubin in the final of the NCAA individual singles championship. Two years earlier he was also a member of the Virginia NCAA championship team as a freshman.

Uchida was seeking a third ITF/USTA Pro Circuit title of 2017 after previously winning the Canada F7 Futures in September and the USA F22 Futures stop in Pittsburgh in July.

The doubles title went to top-seeded Americans Nathaniel Lammons and Alex Lawson, who did not drop a set throughout the tournament. In the final they rolled past wild card entry Jose Gracia of the U.S. and France’s Lucas Poullain 6-3, 6-0.