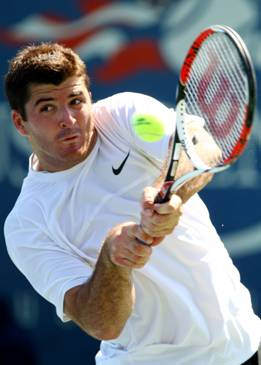 “Just to get it to match point and have that opportunity to play in the US Open again, which I never thought it would happen again,” Witten told the New Haven Register. “I don’t even remember when my last one was. I didn’t think it would be happening again. It is pretty amazing.”

In the first round of the US Open qualifying Witten will face No. 18 seed John-Patrick Smith of Australia.

The US Open National Playoffs were held Aug. 21-24, in New Haven, Conn., featuring regional winners from USTA sections across the country. The tournament was played in conjunction with the Connecticut Open presented by United Technologies, the final Emirates Airline US Open Series women’s event of the summer.

Witten peaked at No. 163 on the ATP Rankings in early 2010 and has played on the USTA Pro Circuit periodically over the past few years, winning his first title in four years in June 2013 at the $10,000 Futures in Indian Harbour Beach, Fla. He posted the best Grand Slam result of his career at the 2009 US Open, qualifying and knocking off two Top 100 players before falling to Novak Djokovic in four sets in the third round. Witten also played in the 2006 US Open. He is a former University of Kentucky standout, reaching the NCAA singles final in 2002, and is ranked No. 868 in the world.

The 2015 US Open National Playoffs-Men’s and Women’s Doubles Championship starts today in New Haven, with 15 men’s teams and 16 women’s teams competing. This was the first year that men’s and women’s doubles was a part of the US Open National Playoffs. The winning teams will receive a main draw wild card into the 2015 US Open Men’s and Women’s Doubles Tournament, beginning on Sept. 1 at the USTA Billie Jean King National Tennis Center.

The 2015 US Open Singles Qualifying Tournament begins tomorrow and ends on Aug. 28. It will be held at the USTA Billie Jean King National Tennis Center in Flushing, N.Y., at the home of the US Open. Qualifying draws are posted on www.USOpen.org.

For more information about the US Open National Playoffs, including draws,
visit www.USOpen.org/nationalplayoffs.