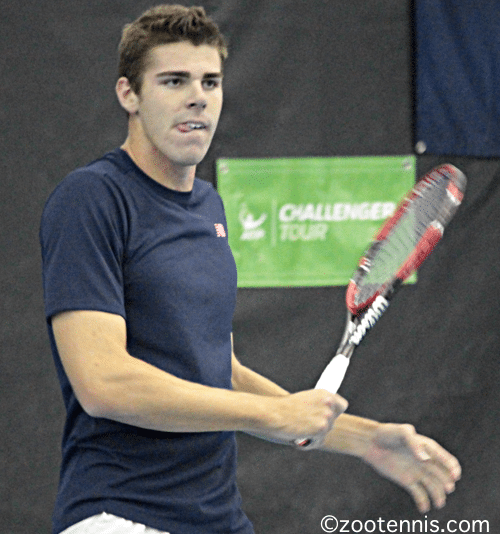 Nineteen-year-old Reilly Opelka captured his first ATP Challenger title at the $50,000 USTA Pro Circuit event in Charlottesville, Va., earlier this month, a result that guarantees him a place in the 2017 Australian Open qualifying tournament.

The 6-foot-11 Palm Coast resident, who was unseeded, defeated Ruben Bemelmans of Belgium 6-4, 2-6, 7-6(5) in the final, blasting a career-high 28 aces in the championship match.

“It was a huge week for me,” said Opelka, who has trained for years with USTA Player Development in Boca Raton and is coached by the USTA’s Diego Moyano. “Prior to Charlottesville I was going to play as much as I needed to be (ranked) 240. That was the goal, to be in Australian Open qualifying. And week one was perfect.”

Opelka, who jumped to No. 208 in the ATP rankings with the title, had played just one other tournament prior to Charlottesville after recovering from foot injuries that surfaced at the US Open qualifying. Although he finished second to friend and fellow teenager Michael Mmoh in the USTA’s annual Australian Open Wild Card Challenge, which ended last week, Opelka candidly admitted no disappointment, even prior to being mathematically eliminated at the Champaign Challenger, where he lost in the second round.

“My main goal was to be in [Australian Open] qualies,” said Opelka, the 2015 Wimbledon boys’ champion. “I think Mmoh deserves [the main draw wild card] anyway. He’s playing better tennis than me. He is much more fit to play three out of five sets than me. I think one hundred percent he’s the guy to beat.”