Jeanne Evert Dubin, former tennis pro and younger sister of Chris Evert, died on Feb. 20, 2020, in Delray Beach, Fla., after a battle with ovarian cancer at the age of 62. 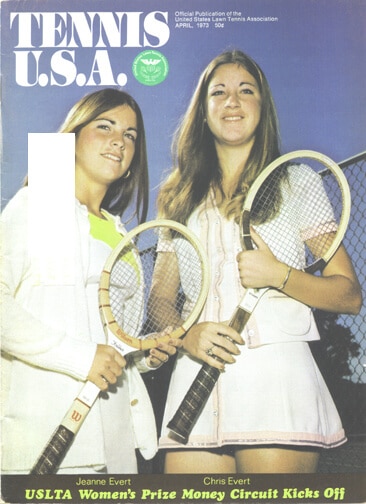 A junior tennis phenom, approaching age 18 she chose to play on the WTA tour full-time rather than take a college scholarship, but the 5-foot-1 Evert could never measure up to sister Chris. She admitted it was difficult to handle the pressure of the tour, and that her first priority was “to be happy,” resulting in an early retirement from professional tennis at age 20 in 1978.

She was the middle of five Evert children born to Colette and Jimmy Evert in Fort Lauderdale. A renowned junior career saw her win three Florida High School Athletic Association individual singles titles for St. Thomas Aquinas in Fort Lauderdale. Prior to turning pro in 1973 she swept the 12s and 14s singles and doubles USTA National Championships titles and finished as a 16s finalist and doubles winner.

At age 15 she played a WTA tour event and defeated world No. 1 Margaret Court. She eventually peaked at No. 28 in the world before retiring to start a family and teach tennis in Delray Beach.

In 1979 she married Braham Dubin, whose company managed municipal golf courses and the Delray Beach Tennis Center, and had children Eric and Catie Dubin. Braham Dubin died of complications of lung cancer in 2006. In 2014 she met Tower Krauss, a realtor, who was her partner in Delray Beach until her death.

“It’s a tremendous loss, without a doubt,” Delray Beach Open Tournament Director Mark Baron told the Sun-Sentinel. “She had been involved with the tennis center and the city’s golf for like 25 years. She was a very nice lady.”

While retired she represented the WTA tour as an ambassador and tennis organizer and founded the Pringle’s Pro-Celebrity at PGA National in 1985. She competed in exhibitions and supported her sister’s Chris Evert Pro-Celebrity charity events.

“Jeanne was selfless, caring and kind,” said Chris Evert. “As a sister, I admired her stellar character and her unwavering devotion to her loved ones. She fought a brave battle and now heaven is lucky to have her.”

She is survived by her children Eric and Catie and four grandchildren; siblings Drew, Chris, John and Clare; and mother Colette.

In lieu of flowers, memorial contributions may be made to The Carol Kimmelman Athletic and Academic Campus, 12680 High Bluff Drive, Suite 400, San Diego, Calif., 92130.