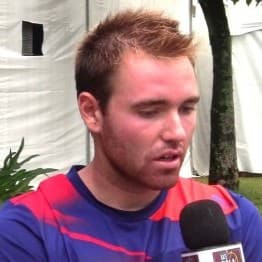 The 22-year-old Fratangelo, who won the 2011 French Open junior singles title, clinched the wild card Tuesday after Jared Donaldson, the only player who could surpass him in the challenge standings, lost his first-round match at the $50,000 USTA Tallahassee Tennis Challenger.

USTA Player Development awards a French Open main draw wild card to one American man and one American woman who earn the most ATP World Tour and WTA Tour ranking points in a series of USTA Pro Circuit clay court events this spring. The USTA and the French Tennis Federation have a reciprocal agreement in which wild cards into the 2016 French Open and US Open are exchanged.

He has won 10 USTA Pro Circuit and ITF Circuit singles titles over the last three years. This year he qualified for the ATP events in Indian Wells and Miami. In Indian Wells, he won his first-round match and pushed world No. 1 Novak Djokovic to three sets in the second round.