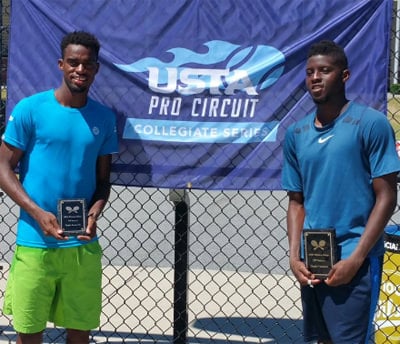 It was the Bradenton, Fla., resident’s first USTA Pro Circuit title of the year and fourth of his career.

The 24-year-old, who entered the event at No. 271 on the ATP World Tour Rankings, struggled through three-set matches in every round leading to the final, three times coming back after losing the first set. The final was a different story as he broke serve early in each set to take command, serving it out at 5-2 in the second set.

In the all-unseeded doubles final the University of Virginia’s Thai-Son Kwiatkowski and recent University of Illinois graduate Jared Hiltzik defeated fellow Americans Austin Smith and Dennis Uspensky 6-4, 6-2. It was the second straight doubles title for Kwiatkowski who won at Charlottesville the previous week with partner Mac Styslinger.

The USTA Pro Circuit Collegiate Series operates as a circuit of more than 10 tournaments held on or near college campuses nationwide to provide a platform for college players to gain pro experience and earn the ATP or WTA ranking points needed to transition to the pro ranks. It complements the schedules of college players, with most of the Collegiate Series events held during the fall semester.