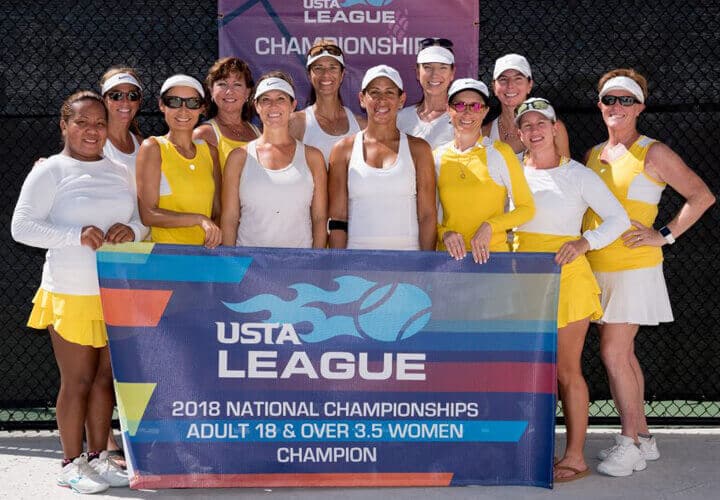 It was going to be difficult to top last year’s record haul for Florida at the USTA League National Championships. In 2017 six Florida adult tennis teams were crowned national champions in their respective divisions, a USTA Florida League-history record.

This year Florida only saw one team take home a national championship crown, but overall more teams placed in 1st-4th place nationally than during the record 2017 season.

“In January I told Isabelle Welsh, one of my original teammates from nationals, that this would be our year to get to 3.5 nationals, whether it would be 3.5 40 & Over, or 3.5 18 & Over,” she said. “We accomplished our team goal…when we won we all jumped for joy, screamed, we were super excited, started hugging each other and just could not believe we did it!”

Overall 13 Florida teams finished in 1st-4th place at the 2018 USTA League National Championships, one better than the 12 in 2017.

“We are so proud of our Florida teams that represented us at the this year’s USTA League National Championships!” said USTA Florida Director of Adult Tennis Christine Ducey. “We recognize all the hard work and extreme effort that these teams put into their USTA League tennis, and it shows in how competitive our Florida teams are when the best from across our country come together to compete. Congratulations to all.”

Here are the USTA Florida League teams that placed 1st-4th at the 2018 USTA League National Championships:

The 2018 USTA League season was the sixth season with an updated structure and format that offers four age categories (18 & Over, 40 & Over, 55 & Over and Mixed 18 & Over) to better align participants with players their own age. A fifth age division, the Mixed 40 & Over, was added in 2014.

For complete stories on each winning team go to www.ustaflorida.com and go to the News tab and search under Adult Tennis.

To see your USTA local league schedule for 2019 go to www.ustaflorida.com/local-play.