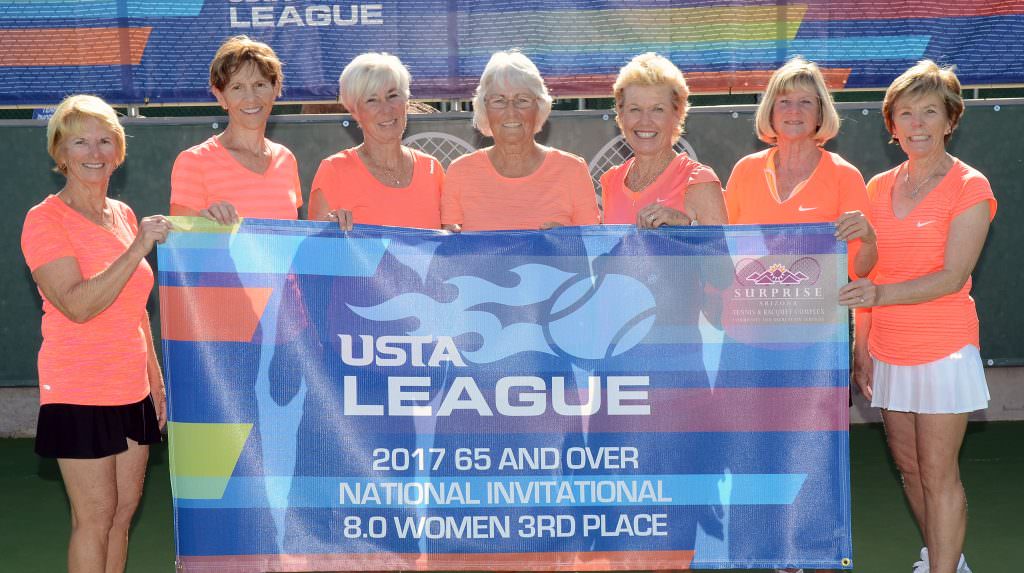 Two Florida teams finished in 3rd and 4th place nationally in late January among stiff competition at the USTA League 65 & Over Invitational National Championships, held at the Surprise Tennis and Racquet Complex on Jan. 12-14 and 19-21, 2018, in Arizona.

The women’s 8.0 team out of Bonita Springs won their 3rd/4th place playoff, and the men’s 7.0 team out of The Villages lost their playoff match to finish fourth.

“We won four out of five of our matches, but lost to the first-place team, USTA Midwest, in the semifinals,” said Rosemary Black, who with co-captain Ann Soper lead the “Orange Crush” team. “It was lots of fun, but we have work to do if we plan on winning next year.”

Both teams advanced to the semifinals by winning their round-robin flights contested Friday and Saturday.

“The players excelled during the tournament despite a very disappointing first-match loss against Las Vegas [USTA Intermountain],” said Mike James, captain of The Villages squad. “The team regrouped nicely by winning the next two matches and winning our overall flight. In the semifinals the team was very competitive, but lost to USTA Hawaii in a heartbreaking 10-point tiebreaker. We then played for third place and unfortunately lost in another 10-point tiebreaker to USTA New England. Overall, a very fun and exciting experience for all of my players and an opportunity of a lifetime. We are all very pleased to compete at this level and looking forward to another opportunity.”

The 4th place national finishers from The Villages

Last April the Bonita Springs women won the USTA Florida League 65 & Over Sectionals, finishing ahead of a team from the Ft. King Tennis Center in Ocala in the final. The men from The Villages in their Florida sectionals championship edged a team from Park Meadow in Ft. Myers 2-1.

The NTRP (National Tennis Rating Program) scale for doubles progresses from 6.0 to 8.0 combined levels of play for the USTA Florida Adult 65 & Over League Championships. For more information on NTRP levels go to www.usta.com/Adult-Tennis/USTA-League/Information/About_NTRP.

For more information on USTA Florida Leagues or to sign-up for a team go to www.ustaflorida.com/leagues.