Having a bye week during the USTA League season doesn’t usually make for the best schedule. Most players look forward to playing as many matches as possible and bye weeks leave most teams feeling shorted.

That’s exactly how the 3.5 ladies started the 2018 winter season. There were seven teams registered, and I had already contacted all the clubs in town to try and get an eighth team but had no such luck. I created the schedule, each team would have six matches, then at the end of the season the Top 4 teams play each other again, and the bottom three teams play each other again, giving each team 8-9 matches total. That’s not bad, but the schedule wasn’t ideal.

Luckily, the Cape Coral Yacht Club had a handful of ladies who really wanted to put a team together. Although the schedule was already posted online, and teams were preparing their line-ups for the first match, I was steadily working with CCYC to send them any new players in town to fill their team. The other teams in the league were extremely patient and accepting to take an eighth team so late in the process. CCYC was also very welcoming to many players who they’d never met before, but joined together to play on the same team.

It was just days before the first match when everything was confirmed and we had eight teams in the league! It may be a small feat, however all teams involved were so supportive and encouraging in the process, I think it really said a lot for the USTA 3.5 ladies in this area. It showed me that the players are not just “in it to win it” but they really appreciate the effort it takes to form teams and showed me the camaraderie that can be had between opposing teams.

Summertime in Florida is such a great season for beach time, family vacations, and surely some tennis! For those of you who live on Florida’s Southwest coast, you know that lightning and thunderstorms can appear out of nowhere and ruin any outdoor plans in an instant.

We all play the waiting game to see if the storm will pass by without hitting us, or if it’ll rain early enough that the courts will have time to dry before match time. The weather alone really deters several people from wanting to play, or from captaining teams during the summer months.

However, there are plenty of people who want to play for fun. So this summer, instead of forming typical leagues, the ladies in Lee/Charlotte have joined a Round Robin League. This league does not advance past local play, it doesn’t count towards NTRP ratings — we aren’t even going to input scores. Instead, all the ladies must do is sign-up and give availability each week. It doesn’t matter how many players from your club are available, no line-ups need to be made, and if it rains, no rescheduling will take place!

It’s a care-free, fun social league that will play for nine weeks of the summer. We have four facilities that allowed use of their courts on Saturday mornings, and I think the ladies will have a great time. Hopefully this works out for us every summer and continues to grow each year!

For more info on the round robin league e-mail davis@ustaflorida.com.

Brewery Mini-Tennis Fun Each Month in 2018 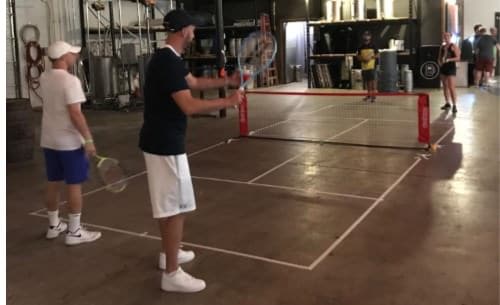 What could possibly be more fun than to play tennis inside a brewery with all your friends?

This format is starting to grow interest as Lee/Charlotte and Naples work together to have free events each month for the remainder for 2018. So far the events are taking place at Palm City Brewing and Millennial Brewing Co. in Fort Myers. The locations are great, and each time we are gaining new interest.

The rules of the game are simple, and clearly state that USTA rules are not to be enforced! The court is only 10 feet wide, and doubles is played with a foam ball and junior tennis racquets. Scoring goes to 21, with teams switching sides at eight points.

Each time they switch sides, players can sub-in another player from their team. So if you’re short on time, you only need to play eight points and can then take a break or head out!

The game is very easy to pick up, so no previous tennis experience is required. It’s such a fun way to spend the afternoon.

Be sure to contact us at davis@ustaflorida.com so you don’t miss out on the next event, or click the “Local League News” button for upcoming events at www.ustaflorida.com/CarlyDavis.