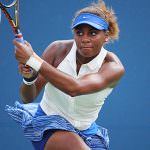 It’s been a good summer for 16-year-old Tornado Alicia Black from Boca Raton — reaching the quarterfinals at the Wimbledon and US Open Junior Championships, qualifying for the WTA Citi Open event in July, making the USTA National 18s final in August and winning a round in women’s qualifying at the US Open.

Yet her best performance may have been in late September, at the International Tennis Federation’s Junior Fed Cup tournament in San Luis Potosi Mexico, where 16 teams from around the world play to capture the prestigious 16-and-under age group competition.

The team from the United States, which included CiCi Bellis of California and Sofia Kenin of Pembroke Pines, Fla., were seeded No. 1, and they lived up to that advance billing. Undefeated in their round robin group, the trio advanced to the semifinals against Russia, the No. 4 seeds.

As she had done all week, Black, playing No. 2 singles, put the US up 1-0 with a straight set win, and Bellis followed with a win, to wrap up a trip to the finals.

In the final, against unseeded Slovakia, Black survived a stern challenge from Tereza Mihalikova, saving a set point in the opener before claiming a 7-6(6), 6-0 victory, her fifth consecutive straight-set singles victory. Bellis again followed and clinched the title with a three-set win over Viktoria Kuzmova. Although the doubles point was never needed, the U.S. girls won all those too, with Black teaming with Kenin for three of the five victories, again all in straight sets.

It was the United States’ third Junior Fed Cup title in the competition’s 30-year history, all of them coming since 2008. The U.S. boys team of Michael Mmoh, William Blumberg and Gianni Ross won the Junior Davis Cup with an equally dominating performance in Mexico. Only four times previously has one country swept both titles in the same year.

Black, who said at the US Open that she has been without a coach for most of the summer, will concentrate on building her professional ranking, now at No. 407, in the months ahead. But at No. 13 in the ITF World Junior rankings, Black is looking to the major Florida junior tournaments later this year to help her reach another objective.

“I’ll focus mostly on pros now, but probably play Eddie Herr and Orange Bowl,” Black said. “I’d like to be Top 10 at the end of the year.”