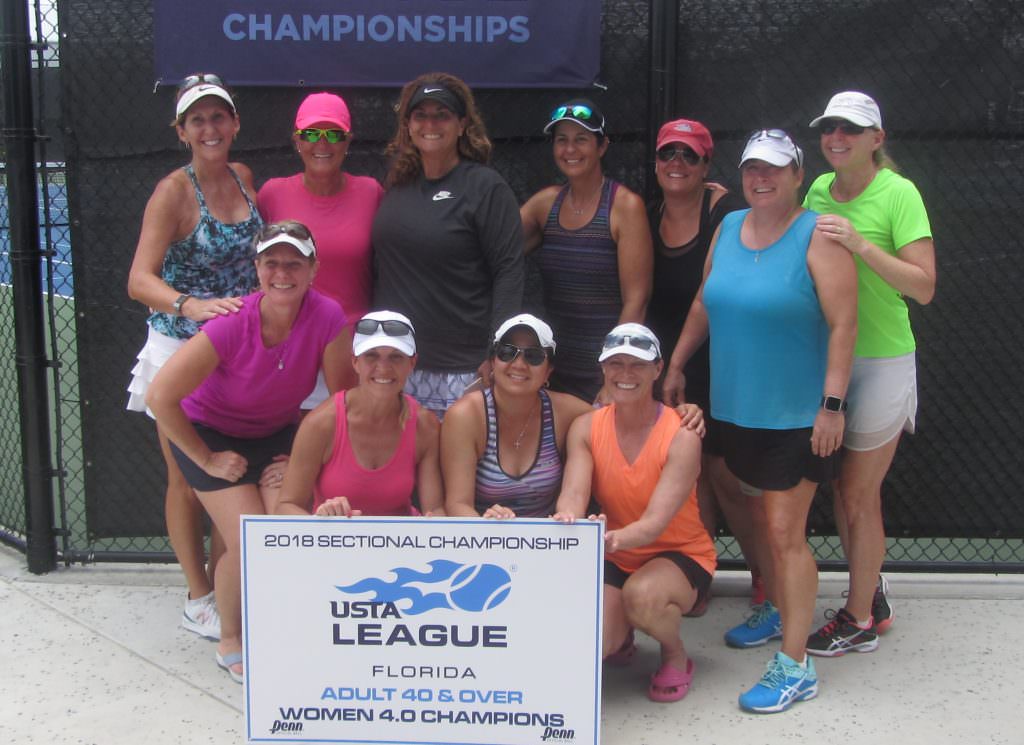 The Collier 40 & Over Women’s 4.0 sectional champions

Congratulations to the following teams who won our local USTA League and went off to make a splash at the USTA National Campus in the Lake Nona region of Orlando.

At the Adult 65 & Over Sectionals this past May the Men’s 8.0 and 7.0, and Women’s 6.0, 7.0 and 8.0 teams all made it to the finals. The winners were the Lighthouse Bay Men’s 8.0 team captained by Ron Mishko, who won out over Hillsbourgh County (River Falls Country Club), and the Men’s 7.0 Players Club team captained by Dave Smith who won out over Hillsborough County (Temple Terrace).

The Adult 40 & Over Sectionals this past July had another happy ending when the Women’s Adult 40 & Over 4.0 Heritage Bay team captained by Mira Rochford took first place over Hillsbourgh County’s Westchase team. The women will be headed to Las Vegas for nationals at the Darling Tennis Center in October. It has been a long road for these women as they have been to USTA Florida League Sectionals for the last four years.

To learn more about upcoming local league opportunities or to see the latest local news go to www.ustaflorida.com/trishdipalo.

Tips From Naples’ Pros: How Losing Tennis Matches Can Help You Win 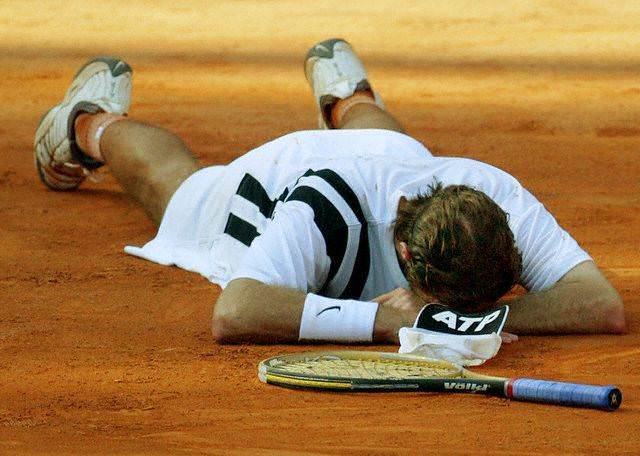 We all know that losing is no fun.

Who doesn’t relive critical points as we toss and turn in bed at night? But instead of wallowing in misery, here are a few tips from some of the top pros in Naples about how to turn losses into lessons:

Curly Davis, tennis professional, The Country Club of Naples: “Losses can teach us what we need to work on. What were the holes in your game and how did they exploit them? What did they do strategically that you need to counter? Remember, failure is an event and not a person.”

Jose Pastrello, director of sports, Collier’s Reserve Country Club: “The first five to 10 minutes after I lose a match is never fun. But after I settle down, I try to evaluate what happened. It’s a chess game. What did my opponent do and what did he prevent me from doing? Were my errors technical or tactical? Try to look for solutions, not excuses.”

Fritz Nau, tennis professional, Pelican Bay Community Park: “Tennis is about discipline and imagination. After a loss, ask yourself if you’re getting your first serve in. Are you returning well? If you’re playing doubles, are you hitting too many balls to the stronger player? Don’t do the wrong thing too much.”

Mindy Rashbaum, tennis/pickleball professional, The Club at Kalea Bay: “Losses teach us to problem-solve. If you win a match you don’t spend much time thinking about it. But if you lose you should analyze why it happened. When people beat you it should make you want to get better.”

Serena Williams recently summed up her philosophy: “I hate losing. But I feel like every time I lose I get better. It’s important for me to have losses. Just the fewer the better for me.”

Karla Araujo is a tennis player and writer who lives in Naples. You can find more of her writing at www.betterafter50.com/author/karla-araujo.