Exciting things are happening on the league scene for 2018. While the standard advancing leagues are still very popular, innovation is the name of the game.

With the success of the Sunday FUNday mixed flex league this past fall, another season will be offered starting in February. If you like to play mixed doubles, but don’t want the pressure of trying to compete for a slot at sectionals, this is for you.

The Brevard Brewsters is another new league that will be geared toward an under-served group of players ages 18-39. The matches will be one singles and two doubles, single-gender with flights 3.0-4.5. The scheduled start of the season is early February. The beauty of this league is that the players don’t have to be USTA members to participate, allowing them to experience USTA League play.

The Techno-Rival league will be geared toward all the tech companies located in the Melbourne area. Companies like Harris, GE, Northrup Grumman, Boeing and many others like them will play for the title of Top Tech team. As with the Brevard Brewsters, no USTA membership will be required to play in this league, but the matches will be open, meaning teams can be any composition of players and levels — the only stipulation is that the strongest two players on the team will play in the first position and so on. The season for this league has not yet been determined, but we will begin recruiting companies right after the start of the new year.

You can see that Brevard County will be hopping with tennis opportunities for 2018. Don’t miss out on the fun. Please contact Pat Dempsey at www.ustaflorida.com/contacts/pat-dempsey or call (407) 955-4652 for more information on these leagues.

Sunday FUNday will be expanding to Volusia County in 2018 after its 2017 success in Brevard County.

There will be some minor changes in the format though, as it will be a Tri-Level mixed league allowing multiple levels to play on the same team. USTA membership will not be required for participation.

There will be a kick-off party in February (site and date to be determined). For all of you that love to play mixed doubles but don’t want the pressure of trying to make sectionals, this is the league for you. It is also a great way to introduce new players to the area to USTA League play. 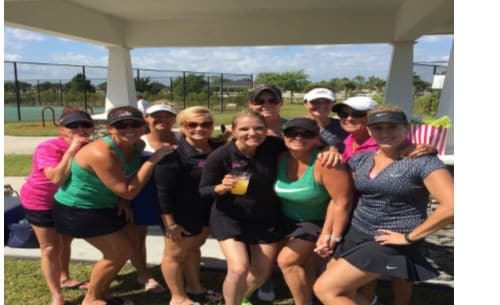 Play Tennis Brevard is a new program designed to teach beginners the entire spectrum of tennis, from technique to league play in easy, mentored segments of 4-6 weeks.

This program will be offered in at least three facilities covering the length of Brevard County and is open to all beginning players, male and female, starting in mid-February. No USTA membership is required.

For more information please contact Pat Dempsey at dempsey@ustaflorida.com or call (407) 955-4652, or view other local league offerings at www.ustaflorida.com/contacts/pat-dempsey.