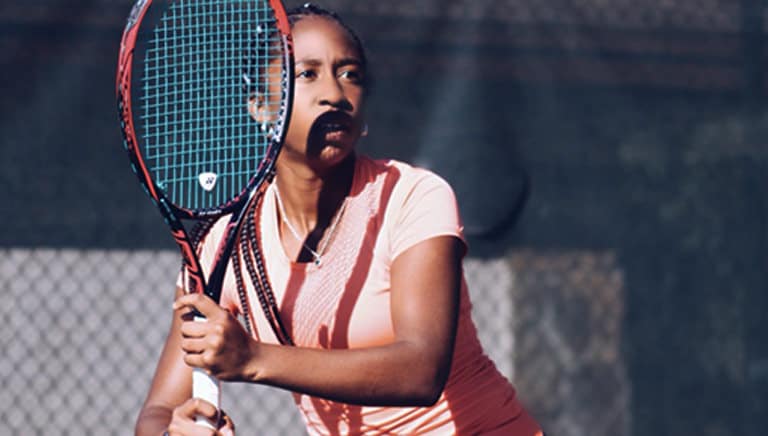 [dropcap]F[/dropcap]ew 14 year olds can earn their way into the main draw of a USTA Pro Circuit event, but that’s where Apopka’s Jaleesa Leslie found herself three months ago in Tampa.

Leslie entered the qualifying for the $15,000 event with no WTA ranking and promptly dispatched of fellow Americans Najah Dawson, Viva Laas and Sophie Abrams without dropping a set to advance to the main draw. There she challenged Canadian Anca Craciun 7-6(2), 6-3, ending a career-best week.

“Being able to qualify for a $15K USTA Pro Circuit event was a great experience for me because it showed me that I am capable to get into more pro circuit tournaments,” said the now-15 year old. “It motivates me to train even harder.”

No doubt the resident of Apopka, just outside of Orlando, celebrated with her self-described favorite tournament reward food, Chick-fil-A.

Jaleesa will play in the girls’ 18s division beginning this weekend when the 2018 USTA Florida “Bobby Curtis” Junior State Championships are contested on June 9-13 at the USTA National Campus in Orlando.

Here’s a look at Jaleesa heading into the 2018 Florida state championships:

What kind of events do you have planned for the rest of the year?
I am trying to get into more pro circuit events, as well as traveling for more ITFs, and playing higher-level USTA tournaments. My future plans on playing pro is to try my hardest to make it to some of the biggest tournaments in tennis.

The 2018 USTA Florida “Bobby Curtis” Junior State Singles Championships will be held on June 9-13 at the USTA National Campus in Orlando. Florida’s top junior tournament will be contested in girls’ and boys’ age 18-12 divisions. For a tournament preview and more click here.