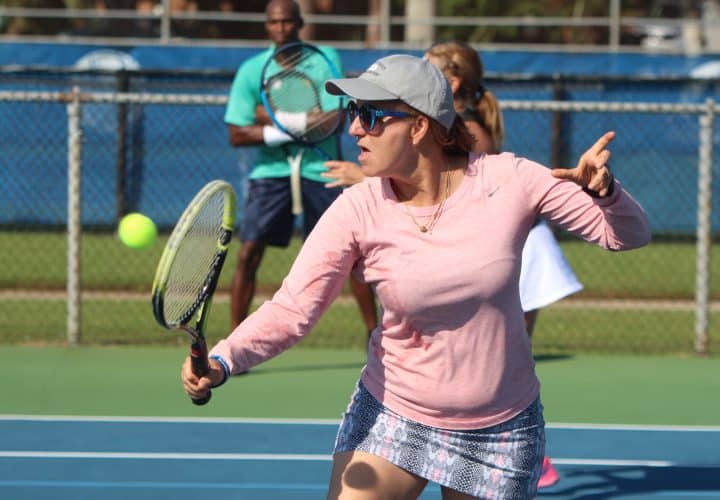 What is the Quest for the Golden Ticket?

Winners and finalists from this tournament will receive USTA Florida’s bid to compete in the National NTRP Championship.

MATCH FORMAT : Best two of three short sets to 4.
GAME FORMAT: First to 4 games wins the set.
SCORING FORMAT: No-ad scoring will be used. The receiver chooses which side the point is played.
TIEBREAKER AT 3 GAMES ALL:

· 2 points serving each (starting deuce side).

· Change ends once only after 4 points.

· If Tiebreaker reaches 4 – 4 it’s “next point wins” the set. Do not switch sides. Players come to net for a racquet spin—winner of spin decides to serve or receive. Receiver(s) chooses which side the point is played.

Multiple flights may lead to a semifinal or final depending on draw size.

Please read the below description for Sectional and National Eligibility

Eligibility Requirements:
• Only current Computer (C) rated players are eligible to play in the Sectional tournament. USTA Florida NTRP Sectional Championships will take place after 2022 Ratings publication. Therefore, players who qualified with a Computer (C), Tournament (T), or Appealed (A) rating may continue to compete at the level at which they qualified. This may or may not reflect their current 2022 Year End rating. You must expect to play players who have subsequently been promoted in the Sectional tournament. USTA Florida has a ratings verification process which takes place prior to the Sectional tournament to verify each player’s unique circumstance, and corrections may be forthcoming after initial invitation if errors are identified. Self-rate (S) players, and Self-rate Appealed (S) players whose rating has changed must compete at their published 2022 Year End rating. In addition, wildcard players may be invited to participate in the Sectional tournament to optimize the draw and player experience.
• Players may have been bumped up for 2023. They are eligible and will play in their qualifying 2022 NTRP Rating.
• If a player is Double Bumped, the player must play up one level from the qualified level (ie 3.0 bumped to 4.0 must play 3.5).
• SELF RATED PLAYERS ARE NOT ELIGIBLE. A player must have a computer rating.
• Players may only play in one NTRP division.