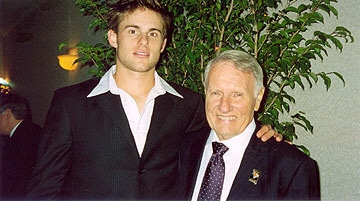 In age divisions 18 through 10, it is a champion’s list that every Florida junior tennis player dreams of adding their name to.
It is also the most competitive USTA Section junior championships in the U.S., spawning the most players of any USTA Section to go on to the professional circuit and rank No. 1 in the world.

On June 7-11, 2014, the 66th edition of the USTA Florida ‘Bobby Curtis’ Junior State Championships will be held in age divisions 18-10 at four Central Florida tournament sites — the Florida Tennis Center in Daytona Beach, Sanlando Park in Altamonte Springs, Red Bug Lake Park in Casselberry, and at the Ormond Beach Tennis Center. Tournament entry opens April 24, and the deadline for entry is May 25, 2014.

In 2012 the tournament was renamed the USTA Florida ‘Bobby Curtis’ Junior State Championships in honor of legendary Florida junior tennis organizer Bobby Curtis. In 30 years of service to USTA Florida, Curtis touched the lives of thousands of Florida juniors over the years, including many who went on to pro careers such as Jim Courier, Andy Roddick and Mary Joe Fernandez, and helped launch what would become the national USTA Jr. Team Tennis program.

Draw sizes for boys’ and girls’ 18s, 16s, 14s, and 12s divisions will be 64. The draw size for boys’ and girls’ 10s will be determined by the number of entries. All divisions are considered a Sectional event for Florida ranking points, except the 10s division which have no age-group rankings in the Florida Section. The 10s division will feature full 78-foot court using the lower compression “green ball” and scoring/rules from the USTA 10 and Under Tennis format, played at Red Bug Lake Park in Casselberry, Fla.

COLLEGE NIGHT AND COACHES Q&A: The championships will host a College Night on Saturday, June 7 at Holiday Inn-LPGA Blvd., where players and parents can learn the ins and outs of obtaining college scholarships and playing college tennis. From 5-7 p.m. will be a College Coaches Q&A, from 7-8:30 p.m. a College Info Session, and from 8:30-9:30 p.m. a College Coaches Q&A. Last year saw more than 25 college men’s and women’s coaches descend on the Florida Tennis Center from universities such as Florida, Florida State, Michigan, Tennessee, Florida Gulf Coast University, Navy, Missouri, Stetson and Dartmouth.

TOURNAMENT ALERTS: Download the USTA Florida app from the Apple or Android app store for push alerts during the tournament.

For more 2014 tournament information go to: