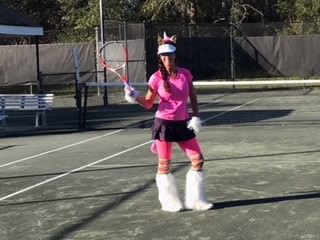 We had our first annual Captains’ Appreciation Event for Duval County/Jacksonville on Sunday afternoon, Oct. 29, 2017 from 4-6:30 p.m. at Deercreek Country Club. All captains from the 2017 league season were invited and we had a great turnout for a tennis round robin and pizza dinner that followed.

It was a nice chilly evening and we gave out a prize for the best-dressed! Annie DeWeese from Ponte Vedra won the prize and we have included her picture as a unicorn! Congratulations to Annie.

It was a banner year for our region. We had a wonderful increase in league players for the year. Our captains are the best and their hard work and effort they put into managing their teams is just fabulous. I would also say the sportsmanship they exhibit toward their own players and other captains is extraordinary as well.

The captains’ appreciation was a first event for our area. I plan to continue with this event in the future and look forward to hosting even more captains. As always, my tennis advisory committee is such a great help to me and our area! Many thanks to them for the job they do. 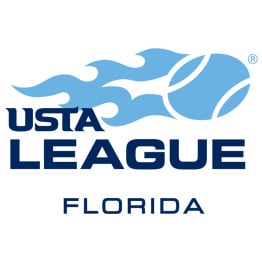 The following is a list of league offerings that will be first up for our community in 2018. Please contact me if you have interest in captaining or playing in any one of these leagues:

Captains’ Meetings for the above leagues is Sunday, Jan. 7, 2018 at Deercreek Country Club from 4-6 p.m.

For a complete listing of all Region 2/Jacksonville-area leagues, divisions of play and time offerings for the new league season in 2018, go to www.ustaflorida.com/contacts/carson-phillips.