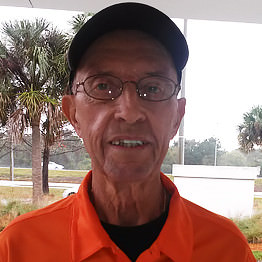 Tennis for beginners and advanced, both children and adults. Adaptive tennis (for deaf, sight-impaired, blind and wheelchair players), Masters Tennis and POP Tennis on short courts for older (and younger) players, red-orange-green ball tennis for young beginners, featuring racquets of all sizes. “Rally the Family” formats for family play. You name it, he has it.

Richards says the informal “easy-on, easy-off” format encourages players to jump in and leave whenever they want.

“I encourage all players, ‘Don’t be afraid to step outside the box’ and try,” Richards says.

It’s blind tennis where Richards has really broken ground. The long-time teaching pro boasts the only blind tennis program in Florida held on public courts at Rotonda Community Park. He uses different size and color sound-emitting balls, and has studied the work of Japan’s Blind Tennis Association, which organizes hundreds of players competing in tournaments throughout the country.

It was in 2015 that Richards decided to add tennis for the blind to his menu of tennis options.

“I was thumbing through a issue of Harbor Magazine and came across a story titled Blind Tennis-Playing by Ear, written by USPTA pro Jack Beardsworth out of Punta Gorda,” he said. “I did some research and said, ‘Now there’s something that will fit right in with my deaf/Hard-of-hearing and wheelchair programs.’ I did the first clinic here in Charlotte County at the Rotonda Community Park in October of 2015, and that started blind tennis here and ultimately elsewhere in Florida.”

Money, says Richards, is not his driver. 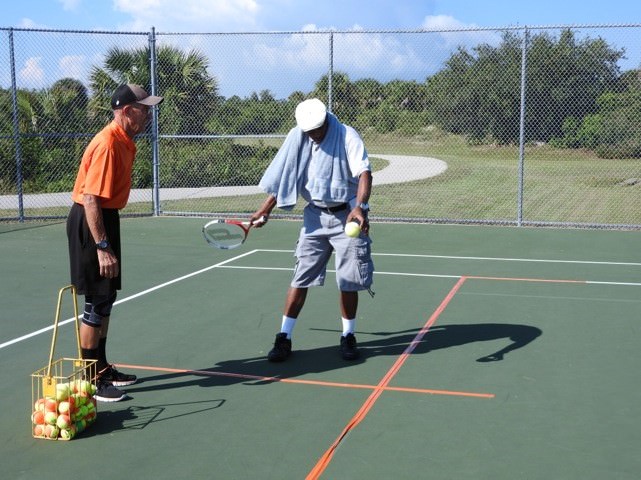 For his blind players he tapes down tactile lines, doing so for the fourth straight year in Rotonda West. Last year he received an invitation as a U.S. representative to attend the first International Blind Tennis Tournament, held in Spain.

This year is his 48th volunteering in tennis, starting in 1970 in Massachusetts, and continuing in Florida when he relocated in 2000.

“Dreams, like these people dream, don’t materialize on their own,” he says of his blind and wheelchair students and why he volunteers in tennis. “Tennis is the sport for a lifetime — let’s make it that way for all.”

USTA Florida thanks Art Richards as the May 2018 Florida Tennis Volunteer of the Month for his work introducing tennis to and working with special-needs and all tennis players in the Rotonda West and surrounding communities.

If I could play tennis with three people, they would be…”My deceased wife, my blind student and my granddaughter.”

When I am not playing tennis I am…”Working part-time two days and serving on community committees.”

My best tennis memory is…”Presenting clinics in deaf schools in Massachusetts with a deaf teaching pro.”

I like to volunteer in tennis because…”It’s the best family sport that lasts for a lifetime.”