Rain suspended one division of play but eventually five different county winners emerged on Monday from the final round of the 2018 USTA Florida Combo 50 & Over 6.5/7.5/8.5 League Sectionals, held Nov. 10-12 at the Florida Tennis Center in Daytona Beach.

“Our experience during the last several years with opposing captains and their teams has been more than fun and worth the experience,” said Hillsborough Men’s 8.5 captain Barney Bailey. “The Avila Mutiny from will continue to compete and hope for another opportunity to return to USTA Florida Sectionals play. Thanks to [tournament personnel] Jodi [Manning] and Clark [Higgs] and the rest of the USTA staff on site for always making this a fun event and well managed.”

Collier County (The Players Club & Spa, Naples) in the Men’s 6.5 division prevented Marion County from winning a second straight division title by edging them 3-1 to 2-2 match victories in round robin play.

“This was a dream team from the very beginning in tennis ability, personality and respect,” said Collier team captain Jim Bifaro. “We were undefeated during the season 7-0 and only lost one court out of 21.”

“I enjoyed captaining and being part of this small team from Gainesville,” said Sorin Fratila. “This trophy stands alone proudly witnessing my teammates commitment and dedication. We started a journey without an end, and lots of things are yet to be discovered.”

Pinellas County was almost a two-time winner, edged 2-1 by Alachua County in the Men’s 7.5 final.

“The level of play at sectionals was exceptional and we certainly rose to the occasion,” said Pinellas’ winning Women’s 7.5 captain Ellen Johnson. “Every player who was able to go to Daytona had the opportunity to play, and every player contributed by winning key matches for our team. This victory was definitely the result of 100 percent team spirit, effort and motivation. Sportsmanship was exemplary and we are so proud to bring home the victory banner to the St. Pete Tennis Club.”

Miami-Dade County came up short 0-2 in finals, both teams hailing from the Ron Ehmann Tennis Center in Miami.

The Women’s 6.5 division final was suspended by rain and will be made-up on Dec. 7 between finalists Alachua County (Gainesville Golf & County Club) and Marion County (Golden Ocala Golf and Equestrian Club, Ocala).

The competing teams represented various clubs, parks, recreational departments and organizations, and finished at the top of their local leagues during the 2018 season to advance to the USTA Florida Combo 50 & Over League Sectional Championships.

For Combo 50 & Over 6.5-8.5 doubles-only division play, the combined NTRP (National Tennis Rating Program) ratings of each doubles team may not exceed the level in which they are competing, and the NTRP rating difference between members of an individual doubles pair may not exceed 0.5. For more information on NTRP levels go to www.ustaflorida.com/adult-tennis/usta-leagues/#section-ntrp-ratings. 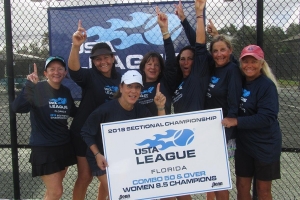 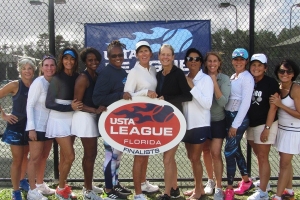 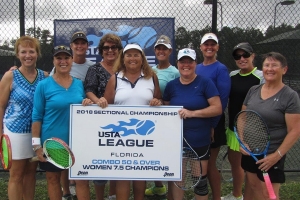 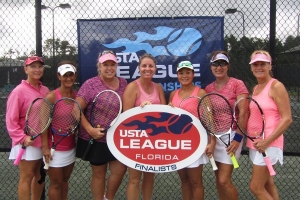 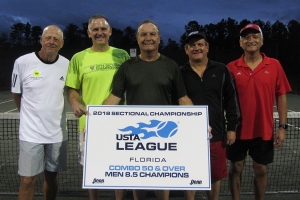 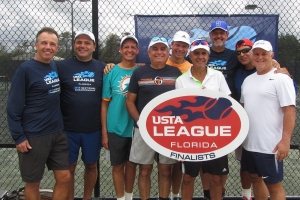 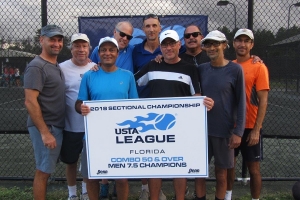 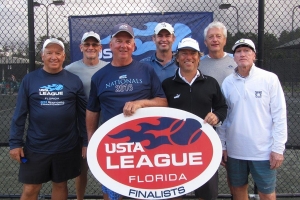 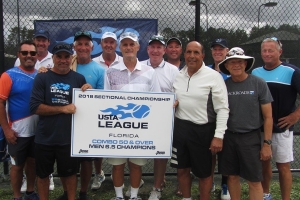 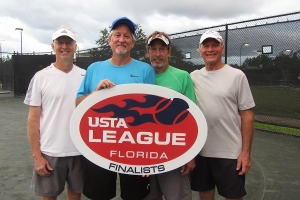 Hillsborough further separated itself at No. 1 after the Combo 50 & Over Sectionals with Broward, Duval and Pinellas counties holding in a three-way tie for second place. The USTA Florida League Championship Cup is awarded to the county with the most league sectionals titles during the 2018 season (standings through Nov. 13, recent winners in bold): 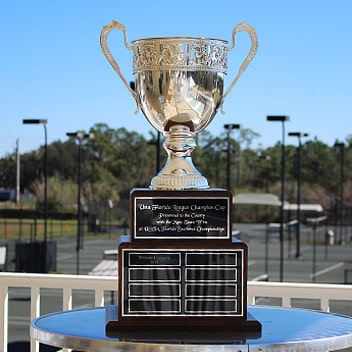