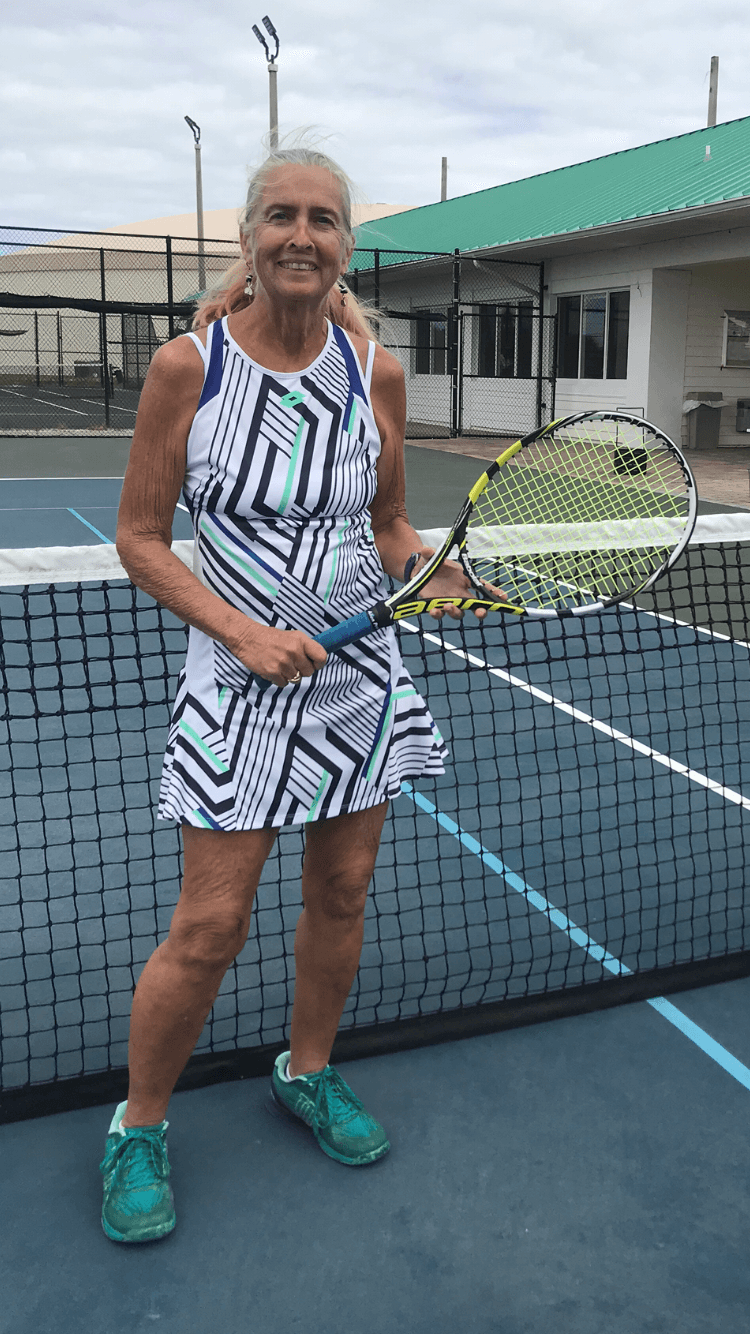 You wouldn’t expect a Christmas gift to be the beginning of someone’s tennis journey, but for Anne Barto, the holiday surprise kicked off a lifelong hobby.

“I first picked up a tennis racquet when I was 18 and a freshman in college, my dad had got me one for Christmas,” she shares.

Barto grew up in Chattanooga, Tenn., but there were no tennis courts in her neighborhood. She began familiarizing herself with the names of the top players while watching the tournaments on television. She played intermittently after receiving her first tennis racquet, but it wasn’t until a year later that she really started to get into the sport.

“I played only singles and with only one person for over 15 years before I decided to join a team,” she recalls. “I had never played doubles, so my singles rating was higher than my doubles. The team I joined only played doubles, so I quickly learned that doubles was a whole different game.”

After joining a team, it didn’t take long for Barto to become hooked on competitive tennis. Every time she moved to a new area, she would seek out a tennis league to join. Now residing in Cocoa Beach, Barto volunteers at the Racquet Club of Cocoa Beach as a captain for several USTA League teams and serves as an Ambassador for USTA Florida’s Love to Play beginner tennis program.

“She is one of my best captains and has continued to captain teams for many years while also volunteering to be one of my tennis ambassadors for our Love to Play classes,” says USTA Florida Adult Play Coordinator Gina Palombi. “She’s extremely friendly, encouraging to others and wants to help grow tennis.”

Barto took the plunge into captaining after a friend and fellow captain asked if she would be interested in taking on captain duties for her team. Barto enjoyed the challenge, and now normally captains two to four teams at a time.

“My favorite part of being a captain is trying to see if I can put together a winning line-up – it’s great when you do!” she exclaims. “I also enjoy putting new teams together when I may not know some of the players or their abilities.”

Her devotion to tennis blossomed when she heard about the Ambassador program for the Love to Learn/Love to Play adult beginner series.

“I knew this was something I would enjoy being a part of,” she explains.

USTA Florida’s Love to Learn/Love to Play programs are custom-designed for adult beginners to learn the game of tennis in a fun, fast-paced, no-pressure environment. Serving as an Ambassador was the perfect fit for Barto, because she wanted to help local adults learn to love the game of tennis as much as she does.

“I want people to see that it is a sport you can learn and have fun playing as an adult, even if you have never played before,” she says. “There are opportunities to play competitively with those who are at the same skill level as you. Or, if you just want to play for fun with friends or family, the program can prepare you to do that too.”

The adult beginner programming also introduces Barto to new people, one of her favorite parts of the game. The friendships that began at the net and continue beyond the court are one of the aspects of playing tennis that she cherishes the most. The sport is a big part of Barto’s life, which is why she chose to give back to it as a volunteer.

“Volunteering is a win-win situation,” she affirms. “People can see that you care so much about something that you are willing to give up your time for it, and it’s rewarding to you because you have the opportunity to share a passion you hope can be picked up by others.”

USTA Florida thanks Anne Barto for all the time and effort she has committed to growing the game of tennis amongst beginners. We applaud her work as a member of our #VolunteerAces and her dedication to Florida tennis!

My earliest tennis memory was… “My Dad getting me a tennis racquet for Christmas my first year in college.”

If I could play tennis with three people, they would be… “Andre Agassi, Chris Evert, Andy Roddick.”

When I am not playing tennis I am… “Kayaking, biking, reading, or making jewelry.”

My best tennis memory is… “My husband beating me for the first time when I was 9 months pregnant.”

I like to volunteer in tennis because… “I enjoy sharing my love for the game and seeing others enjoy it as well.”