APPROXIMATELY SIX YEARS AGO, tennis made the baseball equivalent of not making six-year-old children use heavy adult bats and run the bases on full-size adult fields.

T-ball is for kids, and baseball for teens and adults. Seems logical, right? 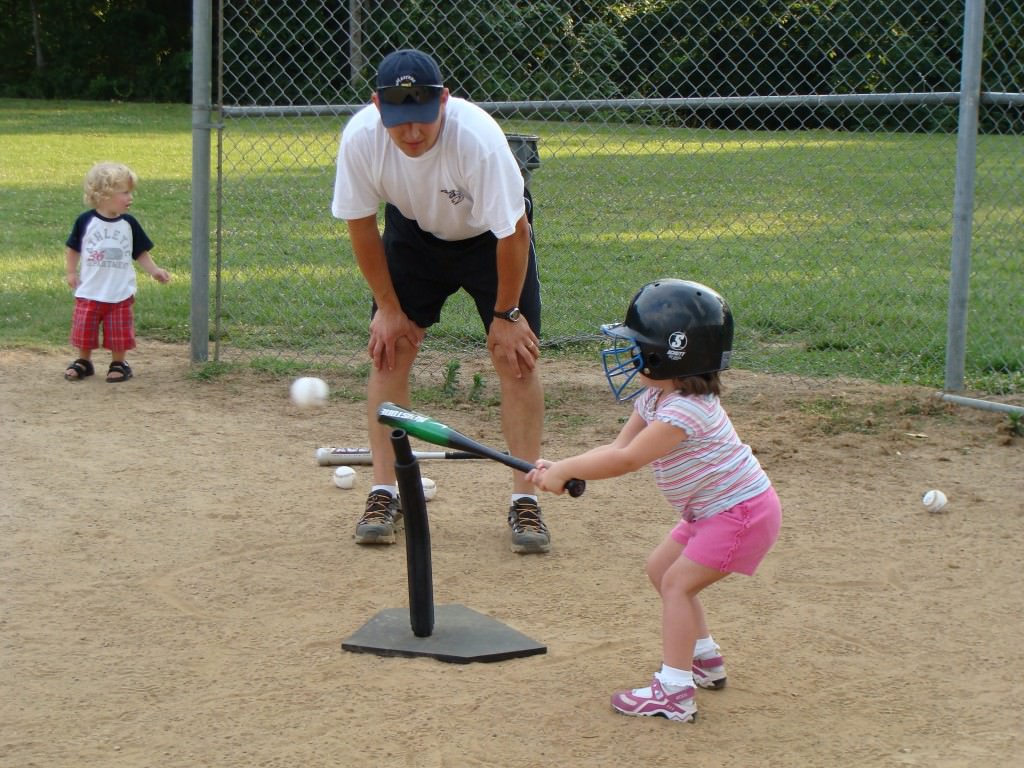 ‘That kid needs to be facing 95 m.p.h. fastballs!’ would say baseball coach traditionalists

“If it ain’t broke, don’t fix it!” was the backlash from some teaching pros on tennis’ version of T-ball.

But youth tennis was broke, according to the numbers.

The U.S. had one of the smallest pools of 10-and-under players in the world among large countries. In the ultra-competitive U.S. sports market, kids weren’t having a fun initial experience in tennis, and usually one shot is all you get. They were then off to soccer or baseball or golf or hockey — or worse, strictly “couch sporting” — video games and TV.

That, everyone could agree on, needed to be fixed.

What is now referred to as USTA Youth Tennis or USTA 10 and Under Tennis makes tennis kid-sized and fun. Smaller racquets, court sizes, lower- and slower-bouncing balls that allow for longer rallies and net play, have made the game more fun and engaging for children.

And six years later, we’re on the verge of high-level tournament-competitive juniors that have progressed through a youth pathway that are showing all the benefits of learning the game the right way.

Laurent Leclerc, tennis director at the renowned Midtown Athletic Club in Weston, Fla., is conducting his own tennis experiment.

He is 10 years into using what started as his version of mini-tennis and became the USTA 10 and Under Tennis graduated equipment. Now he is tracking the progress of kids that enrolled early in the program. 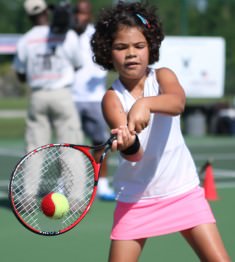 “We have a junior program of over 300 kids, and those who allowed themselves to really grow along the path of each level of balls and court size have a more immediate success when moving along to full-court play,” Leclerc says. “You can see that their technique is so much sounder, and it is much easier for them to make the proper adjustments to be successful on the full court.”

Midtown Athletic Club began its own “Junior Development Pathway” in 2006, featuring red foam balls for beginning levels, and orange balls for the more advanced kids age 10 and under. Two years later it was selected by the USTA as one of 10 pilot sites across the U.S. for what would become the USTA Youth Tennis format. Four kids age 7-9 from Midtown were selected to play during Arthur Ashe Kids Day with Novak Djokovic, Andy Roddick, and Melanie Oudin among others, and also to participate in an exhibition with the USTA Youth Tennis format equipment between quarterfinal matches at the US Open.

“Those kids are 14-15 years old now,” Leclerc says. “They are now competing at a high [USTA Florida] Section level or nationally. It is wonderful to see that these seven kids, who were top in the program in 2009, continue to enjoy a very successful competitive career. In another four years, we will be able to study the full impact of their progressive development against other players who followed a more traditional pathway.”

Leclerc said one of his most telling experiences over the years with the Youth Tennis format was working at Club Med Academies in Sandpiper, Fla., when he hosted the advanced Little Mo tournament.

“One year we hosted the orange ball 9-under, as well as a yellow (adult ball) 9-under tournament,” he said. “I had both finals playing on the same bank of courts. It was so obvious that tennis was being played on the orange-ball court. I was not sure what was being played on the other court — moonballs with both players staying 10 feet behind the baseline. On the orange-ball court were great rallies, including slice approaches and volleys!

“Of the kids we worked with ranked in the Top 100 in the country, 50 percent of them started tennis with the red ball. Many kids are extremely grateful for that opportunity and attribute it to making them smarter players.”

Tim Mattek feels he has a pretty good handle on developing young children with modified equipment.

If the name sounds familiar, he is the father of WTA pro Bethanie Mattek-Sands, who this month won both the women’s and mixed doubles titles at the French Open. 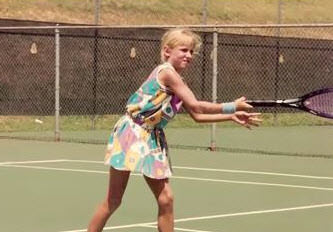 “Just today, [Bethanie and I] were reminiscing about her younger days in Rochester, Minn., when she and I would play a lot of ‘mini-tennis,’ as she calls it,” he told USTA Florida just prior to the start of Wimbledon.

Like Leclerc, Mattek was a pioneer in using kid-sized equipment prior to the USTA’s nation-wide roll-out of the Youth Tennis format.

“This version of tennis that we played so often when Bethanie was getting started was on a miniature tennis court, with a proportionately lower and shorter net,” he says. “The court dimension was a much smaller version of a regular tennis court, and she used a smaller junior racket. Quite often I would switch to balls with a gentler bounce. The two of us had so much fun playing during this stage when she was at age 10 and under.”

Perhaps more importantly, says Mattek, is the USTA Youth Tennis equipment’s affect on the fragile psyches and bodies of children at this age. It’s fun, and success is immediate with the kid-sized equipment.

“Early success will increase self image and self esteem,” he says. “Bethanie first started out her tennis training with a racketball racket. I can recall being thankful that some of the racket companies were just coming out with some pretty solid kids’ rackets. So as she got a little older and improved in her tennis skills, she would graduate to those higher quality, smaller rackets. The mental and emotional maturity levels of any young kid must always be looked at and constantly addressed throughout the development process.”

Mattek, like other teaching pros that have successfully developed children through the USTA Youth Tennis format, can not imagine starting young children with adult racquets and adult balls.

“Their young brains and bodies can better maneuver and adapt as they are being instructed,” he says of the youth equipment. “When the equipment is easier to handle at these younger ages, the kids can experience more personal successes. With more successes, the game becomes more fun for the kids to play. To me that was important when Bethanie was just getting started with tennis.”

“THE RALLY PART OF EACH LEVEL IS MOST IMPORTANT”

Coaches that utilize the USTA Youth Tennis format consistently point to producing well-rounded players age 10 and under who learn slice, topspin, the art of approaching the net, volleying, and how to think and construct points.

Children wrestling with swinging heavy adult racquets at adult balls frequently gravitate toward trying to develop the few “killer shots” that can try to control — the big serve or the giant forehand. Children coming up through the levels of the Youth Tennis format learn all shots, since the racquets and balls only get heavier as they physically mature or master skills.

“It leads to them wanting more,” says Tim Pleasant, head coach of men’s and women’s tennis at Bethune-Cookman University, whose daughter Lilly in June won the Girls’ 10s division at the 2015 USTA Florida “Bobby Curtis” Junior State Singles Championships. “It keeps them interested in the game. The youth tennis pathway is now giving them goals they can see on and off the court.”

Lilly started the game and was brought along strictly with the USTA Youth Tennis kid-sized equipment at the age-appropriate levels, both in Junior Team Tennis play and at tournaments.

“She simply can out-rally her opponents, and also change the spin and pace of the ball at anytime as part of her tactics in her matches,” Pleasant says of the 9-year-old. “She does not hit any harder than most girls, but she is able to change the pace, the height, the spin, at any given time. We believe with this type of confidence, Lilly will continue to succeed as she gets older and more confident in her abilities.”

Pleasant says he did not let his daughter progress up a level until she could control the ball with a full swing with both topspin and slice, as well as hit both down the line and crosscourt with ease.

“The rally part of each level is the most important,” he says. “I tell parents all the time, that if your child can not keep the ball in play, they do not need to move up. They need to focus on the rally, and not how hard their child might be able to hit the ball. The youth tennis progression will hopefully help younger kids stay in the game longer and lead to instant success as the sport continues to grow.

PLAY THE GAME, STAY IN THE GAME 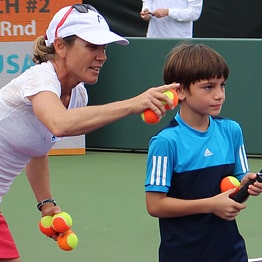 Coaches are back and forth between what is most important — making the experience fun so young beginners stay in the game, or creating the proper competitive levels at the red-, orange-, green-, and finally yellow-ball levels to produce complete advanced players.

But is there a difference? Can you tell a potential champion from a life-long recreational player at such a young age? How about fun AND competition on the youth development pathway?

From the competitive and coaching standpoint, he adds, “It allows [coaches] to address all aspects of modern tennis that demands a much more all-around game than ever before. For instance, we can teach how to close the net to finish the point a lot earlier on the orange-ball court than we could when playing on a full-court with the yellow ball. You can see that their technique is so much sounder, and it is much easier for them to make the proper adjustments to eventually be successful on the full court.” 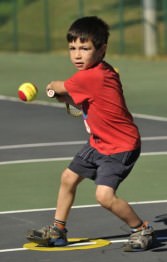 Everyone wins with a larger pool on U.S. tennis players age 10 and under. Over the next five years we should see the results from players age 7-9 who started in the program now reaching their late teens.

Then we can measure whether the “fun program for beginners” is also the ideal level-graduated program for developing all-around junior players who can compete for the U.S. on the international stage.