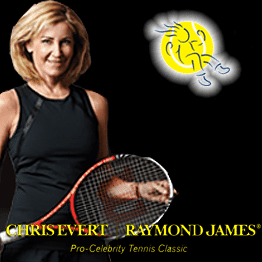 Florida’s own Chris Evert has been appointed as chairwoman of the national USTA Foundation’s Board of Directors.

“I am honored to have been selected as the chairperson of the USTA Foundation, one of the most remarkable organizations I have ever been associated with,” Evert said. “I grew up playing tennis in a public facility where my father could keep an eye on us kids, making sure we all were safe and stayed out of trouble. That was a great, life-shaping experience for me; an experience I want to give back to a new generation of young people. I’m committed to helping make our sport more fun and more accessible to more kids, so that they can enjoy its many benefits, just as I did. The combination of tennis and education is a powerful one, and I will do all that I can to further the USTA Foundation’s mission of improving the lives of under-resourced youth through that powerful combination.”

In her new role the former world No. 1 will serve as the USTA Foundation’s spokesperson and ambassador to promote its mission, raise funds, and increase the impact of its national outreach efforts to under-resourced youth.

In 2016 Evert partnered with the USTA Foundation to establish the Jimmy Evert Fund, a scholarship fund in honor of her late father who was a coach and mentor to many aspiring tennis athletes. These scholarships were developed, along with the support of the Evert family, as a result of the USTA Foundation’s ability to directly impact youth through tennis and education programming, and are designed to provide opportunities for kids to excel both on and off the tennis court.

Evert turned pro in 1972 at the age of 18, winning six US Open singles crowns during her career among 18 total Grand Slam singles titles and a record 157 singles titles. To this day she retains the highest winning percentage of any player — male or female — in the history of the sport, including a 103-match winning streak in 1974. She ranked No. 1 in the world for seven years, winning a total of 1,309 matches in her career. In 1989 Evert retired at the US Open at the age of 34.

Inducted into the International Tennis Hall of Fame in 1995, in 2011 she began her tennis commentary career with ESPN and has covered all four Grand Slam events during the last seven years. In addition to her broadcasting role, Evert writes a monthly publisher’s column for TENNIS magazine.

She annually lends her time and effort to raise funds for many causes important to her and her family, and serves as a board member for several organizations. The Chris Evert Charities Inc., founded in 1989 following Evert’s retirement, focuses on helping children who are at-risk due to drug abuse and alcohol addiction by focusing on programs whose mission is to keep families together as parents seek treatment. The charity has raised more than $25 million since its inception and is the sole beneficiary at the annual Chris Evert Pro-Celebrity Tennis Classic, which has been heralded as the most successful fund-raiser in tennis history.

To read the full story go to www.usta.com/news.