A longtime and passionate soccer player, Amanda Barritt didn’t expect to pick up tennis in her early 30s. But she did so at the advice of her doctor when she could no longer play soccer, the sport she had been dedicated to since college.

“Unfortunately, I was unable to play any longer because of arthritic knees,” she shares. “This led to the start of my tennis journey, which was one of the sports recommended by my orthopedic doctor.”

Barritt was encouraged to try doubles tennis, and in her situation, the persistence from a close friend to join a local group of women on the court turned out to be just what she needed.

“There was a group of ladies in the town of Celebration that played local league tennis in the surrounding area. My best friend asked me to come out and play,” she recalls. “I did not go the first, second or third time she asked, but I am grateful she kept asking! I fell in love immediately.”

Since then, Barritt has been hooked to the sport for life, but she felt that something was missing.

“Since childhood I have always participated in team sports,” she says. “As an adult, I had lost that camaraderie that I always felt being part of a team.” 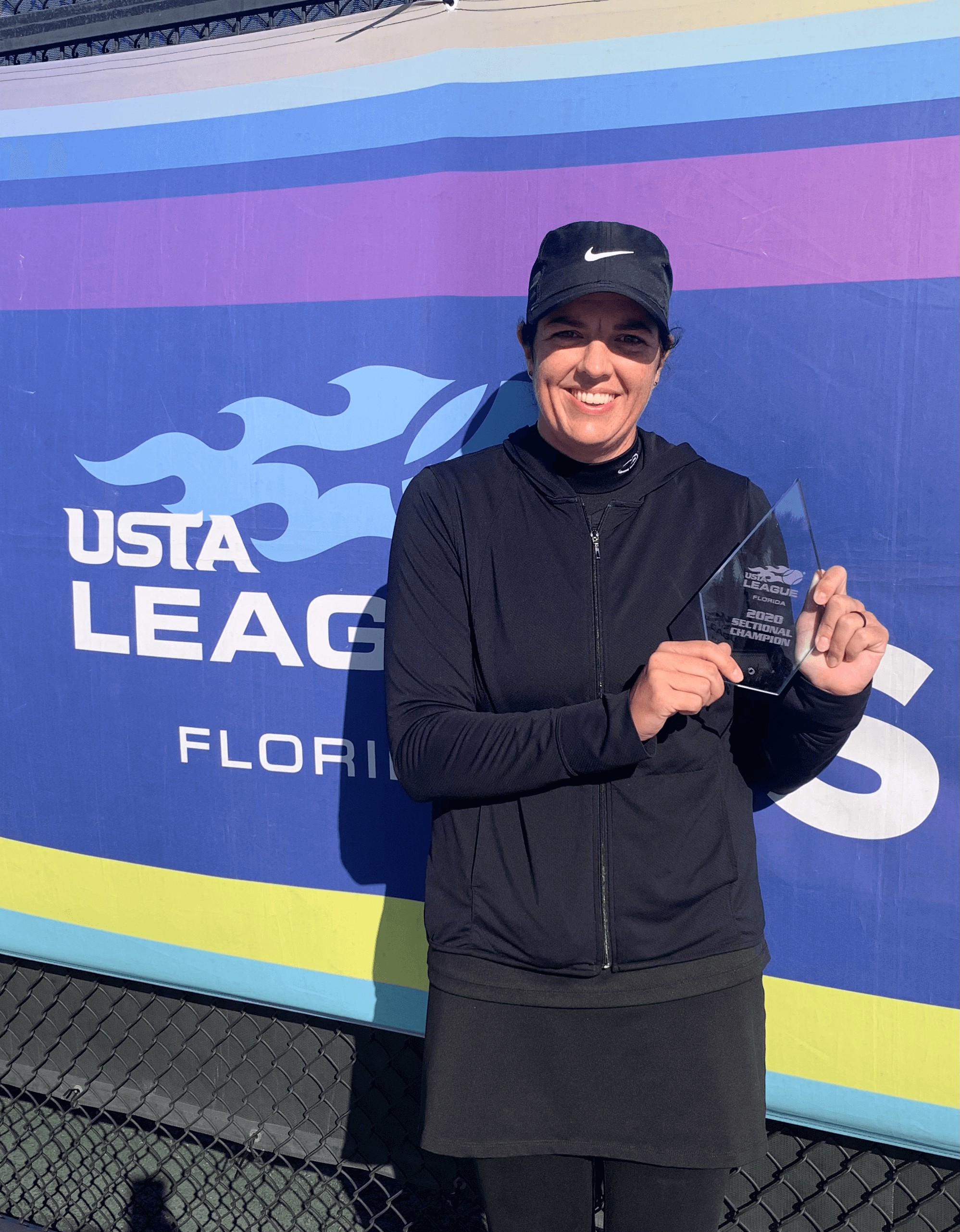 While tennis is known as a mostly individual sport, local league teams help facilitate that exact sociability that Barritt was looking for. During her first two years playing with the local women’s league, she served as a co-captain for the team. In 2017, she volunteered to be a captain as a way to bring players together.

“While playing collegiate soccer I was told I was not loud enough or assertive enough for a captain’s role,” she explains. “I am still that quiet, calm, compassionate and caring introvert I always was, but I found my joy in captaining today. I believe that a leader can lead quietly.”

Barritt hasn’t looked back since stepping up to be a league captain. Her attention to detail, organization, and open channels of communication with players and league coordinators do not go unnoticed and earn her praise. While she loves to strategize and plan lineups, her favorite part of being a captain is the relationships she has developed with her teammates over the years.

“Above all, my greatest achievement has been forging friendships that started with a common bond on the courts and those friendships have continued off the courts,” she says. “I love the game of tennis and I love the people that I have met along my tennis journey.”

In June of 2020, Barritt underwent what she called the inevitable – a double-knee replacement. As she rehabbed post-surgery, she says that tennis is what has kept her going.

“I was able to continue captaining my teams while recovering on the sideline. Now I’m back on the courts playing again,” she shares.

“I absolutely love the opportunity I have been given to captain and play out of the USTA National Campus,” she says. “My first experience there was a Sectionals tournament in 2017. Now our local league teams plays out of the Campus. The staff is fantastic, and I look forward to more opportunities to volunteer there in the near future.”

Barritt’s passion for volunteerism grew through tennis and has blossomed in recent years. She is thankful that volunteering has allowed her to connect her friends with her community. Dedicating her time to something she enjoys so much has brought immense joy to her life.

USTA Florida thanks Amanda Barritt for her dedication to growing the game of tennis in Orange and Osceola counties.

My earliest tennis memory was… “My husband has always played tennis and I used to travel with him to weekend tournaments just to watch him play. Five years ago, my best friend asked me to come out and play with a local group of women. I did not go the first, second or third time she asked. I am grateful she kept asking! When I finally picked up a racquet, I was hooked and have not put my racquet down since that day!”

If I could play tennis with three people, they would be… “Rafa Nadal, Roger Federer, Ashleigh Barty.”

When I am not playing tennis I am… “I am spending time with my family. If I am not spending a weekend at a Disney park then I am at a dance competition watching my youngest daughter perform.”

My best tennis memory is… “Sectional Championship at USTA National Campus in Orlando in December 2020. Each time I attend a Sectional Championship at the National Campus, I enjoy it, but this past December was a little different. After almost a year of limited interaction with most of my team players, we were finally able to spend time together again! The weather was not as cooperative that weekend. Our team battled through weather delays, yet we prevailed by ending the tournament with a first-place finish! The camaraderie and competition were phenomenal.”

I like to volunteer in tennis because… “It brings joy to my life. Through this sport, I have met so many wonderful people that I never would have met without the game of tennis. I get to stay active and healthy doing something I love and I get to spend time with some of my best friends in the process. What a win-win! Since childhood, I have always participated in team sports. As an adult, I had lost that camaraderie I always felt being a part of a team. Volunteering as captain I can bring players together and once again be a part of a team. I also love helping other players at different level that want to be a captain but may not know where to begin. As I believe, there is a leader in every person.”