USTA Florida is kicking off its celebration of Black History Month this February by putting the spotlight on members of the Florida tennis community.

We want to introduce you to Lex Carrington, who is a tennis coach at Club Med Academies in Port St. Lucie. His love of tennis runs deep – he’s been playing the sport since he was a young boy, was a top national-level junior player, and the game even led him to his wife!

How did you get involved with tennis?

My dad was a player who competed in the U.S. Open and was the American Tennis Association (ATA) Champ, which is the country’s oldest African American tennis organization. He grew up in segregation, so he needed to get special permission to play USTA Nationals from the USTA. A man named Dr. Robert Johnson, who also raised Arthur Ashe, brought my dad from Elizabeth, N.J. to Lynchburg, Va. to practice and train. Althea Gibson was a lifelong friend, as Arthur was, so I was just raised in the game.

My father’s mother was a superintendent of a playground, so my dad grew up playing tennis in an all-black tennis club called the North End Tennis Club in Elizabeth, N.J., which was all black upper-class, doctors, and professionals. With that pedigree in tennis, I was raised around the game. My dad was a coach and he ran tennis clubs in New Jersey, and then when we moved to Massachusetts, he built a club with Hampshire College. So, I grew up the same way my kids grew up, out there on the court and playing.

We’re a tennis family! I like to say that because it’s a great way to raise my three kids and it’s a great vehicle I’ve always thought for talking to my kids at the end of a school day. You know if you don’t really know how to pick it up, you go out and hit a few balls and the guard comes down and they start chirping away as they’re drinking water.

One of my kids is a freshman at LSU, who plays tennis under coaches Mike and Julia Sell. Mike was a national coach for years with the USTA. I have a 15-year-old daughter, Noor, who competes in Florida and plays nationals; and I have a 12-year-old son Ibby who also plays in Florida, nationals, and he’s also a golfer.

As for my wife Marria, she was in my dad’s program when she was 14 years old, and I met her at the tennis courts at my dad’s camp. 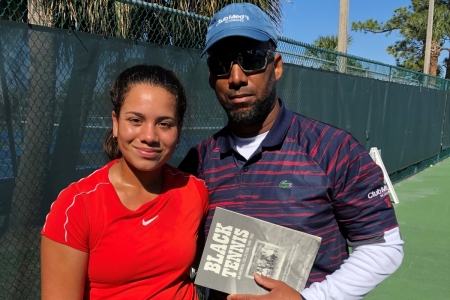 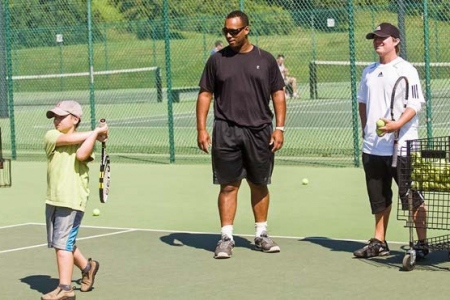 How long have they been playing?

Everybody was raised on the tennis court. My dad owns a program that we’ve had for 30+ years, summer camps, etc., so my kids were “farm-raised” with tennis. Tennis is fun for them, they’ve always come to the courts and met so many different people and were playing with older kids, so it wasn’t ever just a “with Dad” thing.

What do you enjoy most about the sport?

The thing about tennis is that it’s so multi-dimensional. It encompasses mechanics and technique, the strategical and tactical aspects, and then there is the social component and I think that’s the greatest component of tennis. It’s a social game. You can hit balls with a person and then sit down when you take a break and have a conversation. It’s a bridge to starting relationships with people and I think that’s what it’s all about. That’s what sport is about – it’s about making our lives better. Sport is a way to rebuild ourselves and rejuvenate ourselves and that’s the beauty of tennis. The social component is what is so beautiful about it, because you can play it forever. At the tennis club we had in Massachusetts, there were people playing into their 80s. If you go to the highest levels of the game, there’s never been a high-performance player who was made without a team, so there is a real team aspect to tennis as well. I think that’s what kids learn and that’s what I learned, it’s about interdependent learning and working with the person across the net.

What is your history and involvement with Club Med?

Club Med Academy was taken over by Greg Breunich and Gabe Jaramillo. Greg is Nick Bolleterri’s son-in-law and he was instrumental in developing IMG Academy and Gabe ran the program at IMG for over 25 years. So when I came to Bolleterri’s when I was 15 years old, Gabe was in charge of the program and Greg was there so we practiced every day and I’ve known them forever so it was kind of a no-brainer. I searched all over Florida and when I came here, this had the feel that we had back in the academy in the 80s – it was small, it was personal, and we’re at Club Med so it’s a great place to raise kids.

What joys do you get from coaching/teaching tennis?

First, tennis is fun. Teaching and playing with kids is a lot of fun, and it’s also educational, so I’m constantly learning. I always like to say ‘if the coach isn’t having fun how could the kids have fun’ so I have a great time out there and I really look forward to being on the courts with my kids. 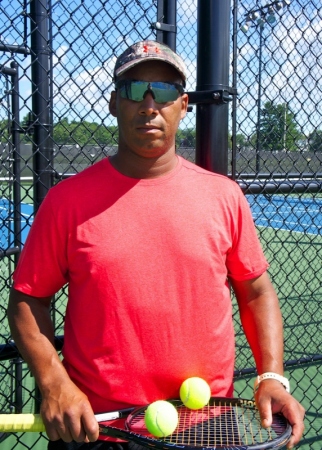 My dad wrote a book called Black Tennis (An Archival Collection: 1890-1962), and I think during Black History Month there is a real opportunity for us to look at the benefits we have and how blessed we are today in what we do. For myself, I played on the U.S. National Team and I’ve played in the junior slams, but at the same time, my father had to get permission to even play. So having said that, I think during Black History Month we can learn from some stories from the past. As much as there are hurdles to overcome things are so much better now and we’ve come so far, but we need to keep going further.

My dream, I’d really like to spend more time helping African American youth who are underprivileged, along with those who are privileged, because I do believe like W. E. B. Du Bois said, it’ll be the Talented Tenth that take us forward. I’d love to be able to work with African Americans who are underprivileged, and in order to do that, I think we need to have a place in their own community where they can develop not only at a young age, but developed all the way through. I feel like oftentimes players are removed from the environment they’re comfortable in, but the longer you can be comfortable and the more information they can get while in their comfort zone, the more success they’ll have.

Why is it important to celebrate black history in tennis and how has it inspired you?

I love sport and I love games – I like chess, tennis, golf – and I think certain games can just enhance your life by the people that you’re around. Black History Month is an opportunity to get an education that there were people before you who also played the game. That could give you a sense of ownership and make you feel like you belong, and I think that is really important because things get tough and you have struggles in life, but if you feel like you belong, you’ll go through it. During Black History Month, African American heritage in tennis is really important. It has to be your personal interest, but it shows us the pathway, some of the things that worked, and the way certain things need to evolve. 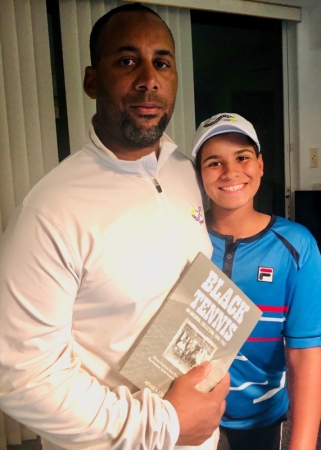 My wife is an educator and she works for a consulting group and goes all over the country to teach teachers and school districts, but one of the things she always impresses upon me is when they go to communities where the parents speak a different language than the majority of the teachers in the school, where the children aren’t culturally related to the school staff, oftentimes those children feel like they’re not cared about because they just don’t have that communication. That, in turn, shows up in their level of effort, their level of motivation, and ultimately in their test scores.

So I think it’s very important that if we’re looking to include different kinds of people, not only do we include them, but we create a setting where they feel comfortable, where they can flourish, and where there are a lot of things that are similar to them.

Why is it important to not only support and celebrate other cultures but be inclusive to all?

Tennis is a worldly game, it’s a global game, it’s played everywhere. We have a language, we use “30 Love”, we have our own way of scoring things – so I think tennis can reach out and take you places that you’ve never imagined seeing.

My father grew up in public housing, he started off in Elizabeth, N.J. and he traveled the world in tennis, and I think that as an example, tennis can take people all over the planet.  And it’s not just about the game, through tennis you have an opportunity to meet different people, people who you may not have ever met before or never would have had the opportunity to meet – people with different professions who come from all walks of life and can look at this totally differently. It can change your entire life.”