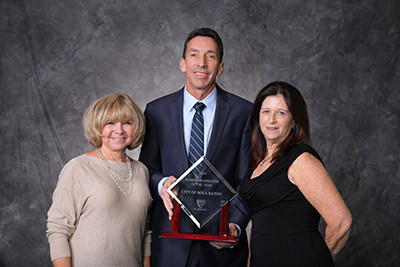 When Betty Comden and Adolph Green posed the question, “Why, oh why, oh why, oh why did I ever leave Ohio?” in their show Wonderful Town, Susan Taylor had the answer: To manage the Swim and Racquet Center of Boca Raton. For 23 years no less!

Loyalty and longevity are in the blood of this Buckeye, whose parents have been married for 71 years, and who still live where Sue grew up — in Willoughby, Ohio. That’s the idyllic town that inspired a Twilight Zone teleplay writer to use the name for an episode about an ideal village.

But all good things must come to an end, and that’s no exception for Sue, who retired on Feb. 6. Also ending was her repeated entry into the club’s parking lot, where she’d look into the rearview mirror, and say, “It’s show time!” And no more arriving at the club where, she joked, “my car could probably drive to by itself.”

Sue, who moved to Florida with her then-husband for his career, started volunteering in the ‘80s for different tournaments of the sport she loved since she was eight. Eventually, she was hired to work in hospitality sales for the then-Lipton tournament, the fifth-largest tennis event in the world.

In 1991, she was hired by the Racquet Club to work on developing memberships; half a year later, she was managing the facility. She worked in that capacity through two different private owners, as well as its current owners, the city of Boca Raton, and the Boca Raton Greater Beach and Park District. She’s particularly proud of maintaining “a high benchmark for customer service” for the facility’s 26 clay courts.

Accolades have found their way to Sue’s courts. She’s quite proud that her club and the two other city-owned facilities — Patch Reef Tennis Center and Boca Raton Tennis Center — were honored by the USTA Florida for Member Organization of the Year in 2014. The previous year, Sue was named Employee of the Quarter by the City of Boca Raton for Motivation and Positive Attitude. And in 2005, the club she managed was named Facility of the Year for large public courts by the USTA nationally, an extraordinary achievement. Sue also was this year’s co-recipient of the Champion of Tennis honor for Regions 6 and 8 by the Community Tennis Committee, a standing committee of USTA Florida. Sue seems to have more awards than Meryl Streep.

Leaving the Racquet Club after nearly a quarter of a century has not been easy for Sue, who says she “cried almost every day” the last month of her tenure, even though she knows it’s time to retire. Speaking of crying, the two-time cancer survivor is still touched by the pink Prince racket she was given by a sales rep with the serial number 0000, the first one the company made as part of a breast cancer promotion. She plans to get it restrung and start playing again after 15 years – now that she has time to enjoy being on the courts as opposed to being in charge of them.

But it’s the people, she says, she’ll miss the most — her staff of so many years, and the members, many of whom have their kids in the same tennis camps that they participated in when they were kids. To Sue, it’s “a community, not a club.”

The tennis world isn’t letting her go quite yet: The veteran facility manager plans to volunteer for the annual USTA National Senior Women’s Intersectional Team Championships and The Turkey Bowl, which is the other contest she’s been hosting for all her Racquet Club years. That’s the event in which a local Boca kid named Andy Roddick once played.

He wasn’t the only big name in tennis to hit or compete at the club: Jimmy Connors played there once, and Sue asked him for a guest fee – just so she could see his reaction. She still remembers that “You gotta be kidding?” look on his face.

There were also a couple of small promising African-American girls who hit with their father Richard Williams. They got a lot of value out of the Swim and Racquet Center, as do all the nearly 500 members who will miss Sue Taylor deeply.